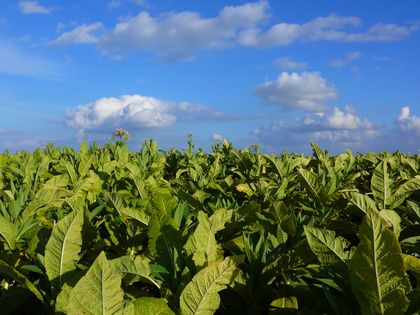 In 1998, Zimbabwe had 3.2 million hectares (7.9 million acres) of arable land, covering 8% of the country's total land area. Most of what is now central Zimbabwe was sparsely populated when Europeans first settled into the region, gradually transforming the bush into fertile farmland. About 4,500 whites own and operate farms that cover one-third of Zimbabwe's most productive farmland. In 2001, agriculture accounted for 18% of GDP and 41% of exports.

In April 2000, some 35,000 guerilla veterans of Mugabe's Bush War revolution began expropriating hundreds of white-owned farms, frequently assaulting and occasionally murdering farmers. The farmland occupation cost millions of dollars in crop damage. Mugabe had promised to give each landless veteran Z$50,000 as well as a monthly pension, but there was no money in the budget for it. Zimbabwe's High Court ordered police to evict the squatters from white farms, but the order was not enforced. Mugabe gave an implied approval of the confiscation by publicly declaring all white Zimbabweans as enemies of the state. The mainly white Commercial Farmers Union of Zimbabwe had been willing to negotiate redistribution of much of the farmland owned by whites, but Mugabe and the ruling ZANU-PF party were recalcitrant to settle. Previous land confiscations ordered by Mugabe have typically resulted in farmland left fallow or under the control of corrupt government officials.

Since 1991, Zimbabwean agriculture has undergone a fundamental transition away from artificial producer and consumer prices, which were set far below world market levels. Many commercial farms changed from corn, cotton, and oilseed production to tobacco and horticultural activities because the government refused to permit producer prices to keep pace with rising input prices. About 63% of the economically active population was engaged in agriculture in 1999.

i found this website to be very useful for all my needs in geography, i will be using this website again.
2
kelvin chikoore

This website has brought more light to my educational researches, i will make use of it
3
prosper manhambara