Almost all of Zambia's industries, commercial agriculture, and major cities are located along the rail lines, which are often paralleled by highways. The Zambia Railways system consists of 2,157 km (1,340 mi) of track. The rail link with the Atlantic via the Katanga and Benguela railways to Lobito Bay in Angola has been affected by instability in Angola since the mid-1970s. Construction began in October 1970 on the Tazara railway, a 1,860-km (1,156-mi) line linking Dar es Salaam in Tanzania with Kapiri Mposhi, north of Lusaka; intended to lessen Zambian dependence on the former white-minority regimes of South Africa and the former Rhodesia (presently Zimbabwe), the line (890 km/ 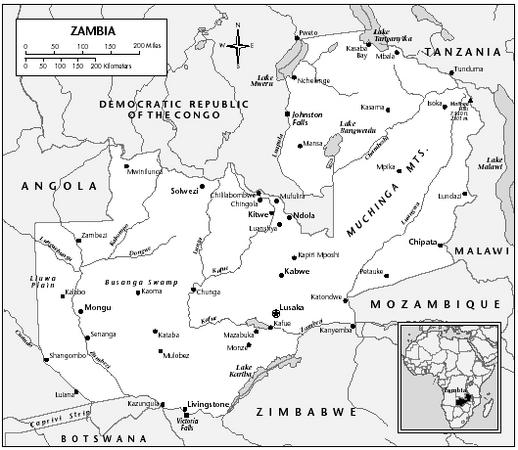 553 mi of which is in Zambia) was completed and commissioned in July 1976. Equipment and operational problems have kept the railway from reaching its full potential, however, and rail cargo links with South Africa and Mozambique ports, passing through Zimbabwe, remain important for Zambian commerce.

Zambia had 66,781 km (41,498 mi) of roadway in 2002. The principal routes were the Great North Road (809 km/503 mi), running from Kapiri Mposhi through Tanzania to Dar es Salaam, with a connecting road in Zambia from Kapiri Mposhi south to Livingstone (Maramba); the Great East Road (586 km/364 mi), from Lusaka to Chipata and thence to the Malawi border, with a connecting road (583 km/362 mi) from Mongu to Lusaka; the Zaire Border Road, from Kapiri Mposhi on the Great North Road through the Copperbelt region to Katanga, DROC; and the Kafue-Harare (Zimbabwe) road. Road services continue to play an important role in transporting copper and general cargo to and from Dar es Salaam. Transport services on the main routes also are provided by the National Transport Corp. of Zambia, the state-owned freight and passenger transport service. The United Bus Co. of Zambia is the largest passenger carrier. In 2000, there were 173,400 registered motor vehicles, including 64,000 passenger cars.

In 2001, there were 111 airports, only 11 of which had paved runways. Lusaka International is the principal airport. State-owned Zambia Airways is the national airline. Zambia Airways provides international service from Lusaka to several African and European countries, as well as domestic service to 17 Zambian centers. In 2001, 48,500 passengers were carried on scheduled domestic and international flights

There are 2,250 km (1,398 mi) of waterways, including Lake Tanganyika and the Zambezi and Luapula rivers. Mpulungu on Lake Tanganyika is Zambia's only port and receives goods supplied through Tanzania. There are several fishing harbors on Kariba Lake.

This web site has helped me with a lot of Zambia QUESTIONS!