With its heavy dependency on copper, Zambia is able to show comfortable surpluses in its public accounts only when the mining industry is prosperous. From 1985 to 1987, Zambia attempted to implement a structural reform program, sponsored by the IBRD and IMF. In 1987, however, the government stopped the program and reverted to deficit spending and monetary creation. By 1992, a new government was committed to curtailing public expenditures through privatization and decreasing the civil service. By 1998, more than 85% of parastatals were privatized. In early 2000, the giant parastatal mining company, Zambian Consolidated Copper Mines (ZCCM) was completely privatized; that transaction helped Zambia satisfy the conditions for balance of payment support.

The US Central Intelligence Agency (CIA) estimates that in 2001 Zambia's central government took in revenues of approximately $1.2 billion and had expenditures of $1.3 billion. Overall, the government registered a deficit of approximately $50 million. External debt totaled $5.8 billion. 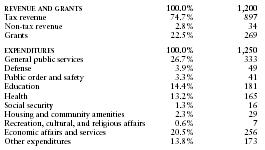 Tax can contribute to government revenue more. There is need to improve our tax system
2
Phnauel

We seriously need a public policy as a nation so that whichever political party comes into power, they should be able to follow it and probably make some amends unlike the current situation where we seem to be following party programmes. All political parties should fit a strategic plan.