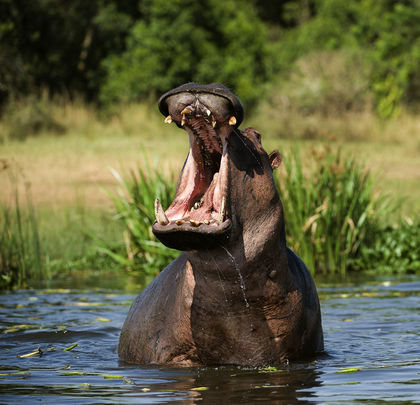 Major environmental problems in Uganda include overgrazing, deforestation, and primitive agricultural methods, all of which lead to soil erosion. Attempts at controlling the propagation of tsetse flies have involved the use of hazardous chemicals. The nation's water supply is threatened by toxic industrial pollutants; mercury from mining activity is also found in the water supply. Uganda has 39 cu km of renewable water resources with 60% used for farming and 8% used for industrial activity. Roughly 80% of the nation's city dwellers and 47% of the people living in rural areas have access to pure drinking water. Forests and woodlands were reduced by two-thirds between 1962 and 1977. By 1985, 193 square miles of forests were eliminated. Between 1983 and 1993, an additional 7.7% of forest and woodland were lost. Wetlands have been drained for agricultural use. Poaching of protected animals is widespread. Uganda's three national parks total over 6,300 sq km (2,400 sq mi). As of 2001, 7.9% of Uganda's total land area was protected. The same year, 18 of the nation's mammal species and 10 of the nation's bird species were endangered, as well as 8 species of plants. Endangered or extinct species include the mountain gorilla, northern white rhinoceros, black rhinoceros, and Nile crocodile.

In 1996, water hyacinth growth created a serious environmental and economic problem on Lake Victoria. By some estimates, the hyacinths covered 6,000 ha (14,820 acres) of water, still less than 0.1% of the lake. When the masses of hyacinths drift into Uganda's ports and coves, they impair the local fishing, trap small boats in ports, and keep fish under the plants. The weed invasion has also been known to affect cargo boat and ferry transportation by fouling engines and propellers and making docking difficult.

Very fantastic and educative. but also other environmental problems include climate change, swamp reclamation, bush burning and encroachment on fragile eco-systems such as swamps.
2
miss cool

very good very specific and exacly what i was lookoing for thanks but can you also put stuff like % of erable land, resources available,climate and stuff like that. thank you anywayz good job :D
3
Ebony

Very informative. I have just returned from a visit to Mubende district and true to the word - deforestation is on the wild! I am seeking information about NGOs involved in efforts to save the forest cover in Uganda. Any ideas from anyone please? Thanks.
5
ella

am doing a research project on Uganda and it's environmental statistics and concerns..i need information! anyone with a web-site or information please contact me!!
6
Sarsh

This was a very good source of information, perfect for my assignment. It didn't have unnecessary information but rather got straight to the point. Excellent! Thanks.
7
KING PROPHET

I'M GLAD TO SPOT ON THE AMOUNT OF DETAILS CONCERNING THE TOPIC.BUT I WOULD LIKE TO ASK FOR MORE INFORMATION ABOUT IT .THANK U
8
jasper asiimwe

GOOD JOB indeeed!its so great to know that ugandans hav come out to tell da truth obout the environment
10
Bukenya MUHAMMAD

Thank you for this environmental statistical data you have given herein. Hope anyone who reads this article will know the likely dilemmas we are to face if we don't rise up and give a helping hand in conservation of our beautiful environment. if we all act superfluously and give a deaf ear to this cause we ought to lose the status of being regarded as the PEARL of Africa. so, fellow Ugandans rise up and do anything within your capacity to see that we conserve our environment for the betterment of our climate and livelihood,
thank you
Bukenya Muhammad
Environment Activist
11
egesa bruhan iuiu

HI i wish the Uganda government could recieve this message and work upon on the rich people who encroach the wetlands, it will be better for Ugandans
12
Nowomutano claire

THIS PRESENTATION IS GOOD BUT JUST THAT YOUR WORK IS NOT DETAILED WHICH WOULD BOOST THE INFORMATION SO THAT A PERSON WHO IS NOT IN UGANDA CAN REALY KNOW WHAT IS TAKING PLACE.
YOU WOULD ALSO GIVE CASE STUDIES OF DIFFERENT PARTS OF THE COUNTRY.
bUT ALL IN ALL ITS GOOD AND I RATE IT 80%
MUGOYA DERICK (PERSUING TO BE METEOROLOGIST)
14
Shaban akweteireho Jr

i reaaly love most of the natural features in uganda thanks for informing us.
16
zizinga ivan

thanks for the material it helped me revise for my final environmental law and policy paper at law school.
18
enamismous

Thanx!
Good work,please keep it up
please help me access the data on waste disposal from different industries into the ugandan water bodies and concequence we are likely to faste if that goes on.statistics and forecast will be of much importance.
20
nik

Thank you for this environmental statistical data you have given herein. Hope anyone who reads this article will know the likely dilemmas we are to face if we don't rise up and give a helping hand in conservation of our beautiful environment. if we all act superfluously and give a deaf ear to this cause we ought to lose the status of being regarded as the PEARL of Africa. so, fellow Ugandans rise up and do anything within your capacity to see that we conserve our environment for the betterment of our climate and livelihood,
thank you
21
Juliet Muhukuza

Thank you very much for the invaluable educative information. I am using the information for strengthening my organizational strategic plan.
22
Gary Winthrope

Thank you for this information it has helped me with many projects.
23
Miriam Kline

thanks, I wanted just some small information on environmental protection in Uganda but I have some light now.
25
Alinga Roselyn

Thanks alot for offering me ur knowledge I was able to do my course work...
26
Musisi Frank

Indeed, this research should open up the minds of Ugandans as regards to the ecosystem. People look for today's survival and not mind about the nature of the future generation. It's everyone's responsibility to protect and conserve the environment. Thank you!