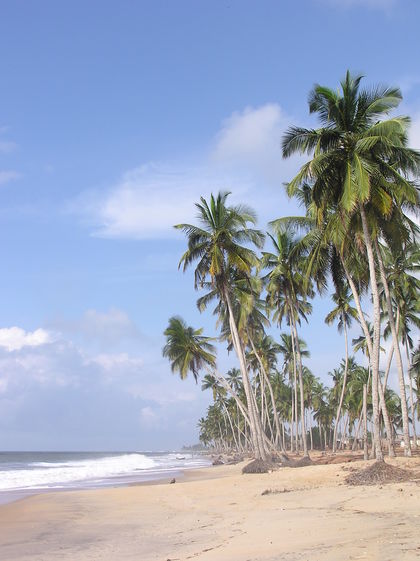 Togo has a humid, tropical climate, but receives less rainfall than most of the other countries along the Gulf of Guinea. In the south there are two rainy seasons, from March to early July and in September and October. The heaviest rainfall occurs in the hills of the west, southwest, and center, where the precipitation averages about 150 cm (60 in) a year. North of the Togo Mountains there is one rainy season, lasting from April to August. Rainfall in this region averages 100 cm (40 in) a year. The coast gets the least rainfall, about 78 cm (31 in) annually. The average maximum and minimum temperatures are 30° C (86° F ) and 23° C (73° F ) at Lomé, on the southern coast, and 35° C (95° F ) and 15° C (59° F ) at Mango, in the north.

hey thanks! i'm doing this report on this country and this helped me out cuz i had to know the climate so thanks.
2
tOgO

thanks so much!!! I had a big project due and if it wasn't for this website I don't know what I would have done!
4
megg

hey thanks! i'm doing a report on togo and i really needed to know the climate. this helped a lot! :]
5
Bethany Gunby

Thanks! I'm doing a project on this country and it helped me because I HAD to have the weather or else i would get like 20 points off!!! Thank you sooo much!
7
Ren

thanks so much!! I needed this for a huge project!! It helped so much
8
Robert

I did a project on Togo, this helped ALOT, thanks :)
9
Lora

Thanks So MUCH Big report due!my teacher said we have to do this report to get the good grades so thanks
10
patrick

Thanks if it wasnt for this i would have failed :D
11
Dan

Hey thanks so much for this!! This helped me alot on my project so thank you!! :) :)
12
Gabriellen

finally i couldnt find the climate for togo any where... there is also a city in this country called Kara and thats my lil sisters name and she said she wants to go there now...good luck
13
J

Thanks! I had a huge project and you helped a ton!
14
Jon Smith

thanks a lot. i got a lot from this. Thanks very much were doing this for a college report and it has helped me soo much
15
mmm

As just about every other person who commented, I too was doing a report on Togo for world geography and needed the info

hey thanks so much this helped me a bunch!!! thanx a million times thanx!!
20
josey

i had to know thie. thanks!very helpful! never would have finished my project!
21
josey

Thanks this is going to help my project as well as my future plans to become future supreme emperor of Togo controlled Sub Saharan Empire. Thankz very much
23
Bridget

thanks togo! you gave me an answer to my social studies question!
25
Elisabeth

Thanks, you totally saved my butt with a Togo project due tomorrow. :P
26
Matthew

hi, just wanted to say thanks for the info, I'm doing a geography project on togo, so thanks a lot =)
27
Aisha

Thank you so much this is informative and has definitely helped me with my homework.
28
Jewl

Thanks, I doing a french project on Togo and this was a very useful tool of info
30
Drew

Thanks, I actually need to know this because I'm acquiring a tarantula that's natural habitat was in togo.
31
Thomas

Anyone else from sage hills elementary who is doing a country report for sixth grade? :)
32
John

This was a very helpful source. I am doing a project on Togo, and I am amazed by how much this helped me. Thanks you.
33
Muriel

I'm doing a project on persuading others to go to togo on vacation. this is a good source