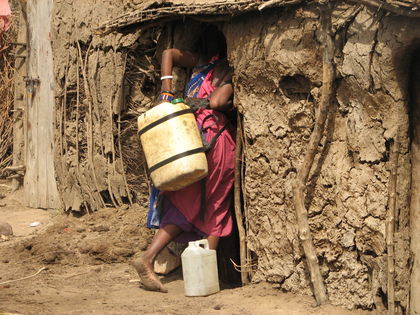 In 1975, the government began to nationalize all hospitals, including those run by Christian missions; private medical practice was ended in 1980. Medical treatment is free or highly subsidized in company clinics as well as hospitals. The pyramid structure of Tanzania's national health care system, stressing primary care at an affordable cost, makes it a pioneer in sub-Saharan Africa. In 2000, 54% of the population had access to safe drinking water and 90% had adequate sanitation. An estimated 80% of the population had access to health care services in 1990–95 and in 1999, public health care expenditures were 3% of GDP. Life expectancy was 44 years in 2000.

In 1992, there were 3,000 rural health facilities, 17 regional hospitals, and 3 national medical centers; in the same year, the ratio of nurses to doctors was 7:3. As of 1999, it was estimated that there were fewer than 0.05 physicians per 1,000 people, and0.9 hospital beds. Medical staff morale was low due to declining wages and management and operational difficulties in the central medical stores and domestic pharmaceuticals industries. Imports of drugs are overseen by the Pharmaceutical Board; there are four local manufacturers.

Special programs of disease control have been carried out with the assistance of the World Health Organization and UNICEF for most major diseases, including malaria, tuberculosis, sleeping sickness, schistosomiasis, poliomyelitis, and yaws. As of 2000, an estimated 44% of children under five were malnourished. In 1997, children up to one year old were immunized against tuberculosis, 82%; diphtheria, pertussis, and tetanus, 74%; polio, 73%; and measles, 69%. Tanzania's tuberculosis treatment program is less than 20 years old and consists of inexpensive drugs that cut recovery time in half.

The female genital mutilation prevalence in Tanzania was lower than most African nations in 1994. An estimated 1.5 million or 10% suffered from the procedure. The government of Tanzania has not prohibited it.

At the end of 2001, the number of people living with HIV/AIDS was estimated at 1.5 million (including 7.8% of the adult population) and deaths from AIDS that year were estimated at 140,000. HIV prevalence in 1999 was 8.1 per 100 adults. The Tanzanian government is working to stop the spread of AIDS by improving the treatment of sexually transmitted diseases. Intervention on some STDs has shown a reduction in HIV prevalence.

Medicare and medicaid should be introduced to poorer countries like Tanzania.
2
Sonja Biermann