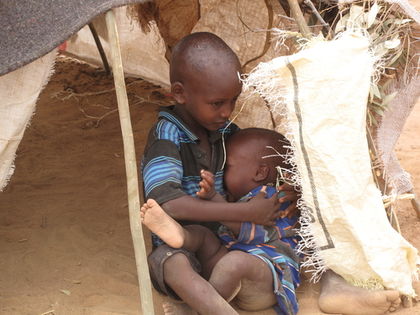 The Somalis are primarily Sunni Muslims of the Shafi'i sect. According to their tradition, their ultimate ancestors were of the Qurayshitic lineage of the Prophet Muhammad. Except for a small number of urbanites influenced by higher education, all Somalis belong to one of the following brotherhoods: Qadiriyyah, Salihiyyah, Ahmadiyyah, and Rifaiyyah. As Muslims they adhere to the law of the Shari'ah whenever it does not conflict with local customary law.

In 2002, a transitional government had not yet adopted a constitution; however, a Transitional Charter had established Islam is the state religion, as he nation has historically been Muslim. Christian mission schools closed in 1972 and foreign Protestant missionaries were expelled in 1976. The 1960 constitution forbade proselytizing of any religion but Islam, a law which is still in effect. However, a small, extremely low-profile Christian community does exist.

As of 1999, the number of practitioners of radical Islam is growing. During the first half of 1999, there was an influx of foreign Muslims into Somaliland, reportedly Islamic teachers from Afghanistan, Pakistan, and Sudan. Al-Islah and Al-Ittihaad are two Islamic groups which have organized within the country with a goal to establish an Islamic state. In general, groups of non-Sunni Muslims are viewed with suspicion by the Sunni majority. By March 1999 the Minister of Religion in Somaliland issued a list of instructions and definitions on religious practices. Under the new rules, religious schools and places of worship are required to obtain the Ministry's permission to operate. Entry visas for religious groups must be approved by the Ministry, and certain unspecified doctrines are prohibited.

This is very nice information and actually very suprising for me... I am in the 11th grade... and never knew any of this... ha It was very helpful with my project that is worth 45% of my total grade... So, Thanks(:
3
akaley

i am doing a social project and this is really helping. (: thanks
4
DeeDee

This Is Really Helpful For My Prject, Also 7th Grade
5
Jamal

Today I woke up in my bed with poo poo on my sheets and then made my mom clean it up #mylifeispoop.
6
Justin

This really helped for my project.I am also in 7th grade.
7
karly

this will help alot. and i am doing a report on somalia witch is almost 70% of my grade.