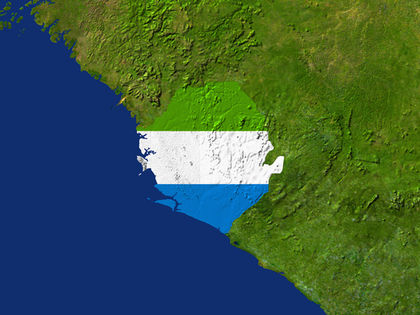 Agriculture is the primary occupation in Sierra Leone, employing two-thirds of the labor force and accounting for 50% of GDP. Most Sierra Leoneans live on small, scattered farms, following a scheme of bush-fallow rotation, slash-and-burn field preparation, and limited use of fertilizer. Agricultural exports in 2001 amounted to nearly $7.5 million and consisted of coffee, cocoa, palm kernels, piassava, kola nuts, and ginger.

Rice, grown by 80% of farmers, is the most important subsistence crop and, along with millet in the northeast, is a food staple; 247,000 tons were produced in 1999, down from an annual average of 508,000 tons during 1989 to 1991. The Rice Research Institute, located in the Northern Province, breeds high-yielding varieties for seed. Other domestic food crops include cassava, yams, peanuts, corn, pineapples, coconuts, tomatoes, and pepper.

Coffee is grown in the eastern and southern provinces; production totaled 15,000 tons in 1999. Cocoa is grown in the Kenema and Kailahun districts of the Eastern Province and in the Pujehun District of the Southern Province, mainly on smallholdings of about 0.4–1.2 hectares (1–3 acres). In 1999, an estimated 11,000 tons of cocoa beans were produced. Palm produce is derived from stands of wild palms, mainly in the northeast and southeast; production in 1999 included 22,000 tons of palm kernels and 36,000 tons of palm oil. Although there is substantial local consumption of palm kernels, they are a major agricultural export. Piassava, a raffia palm fiber used for broom and brush bristles, is grown in the swampy areas of the extreme south. Small amounts of kola nuts were also exported, and modest crops of bananas, pineapples, and sugarcane were grown.

The 1991 invasion of rebels from Liberia in the eastern and southeastern provinces severely damaged agricultural production and exports. Whereas annual agricultural growth averaged 3.1% during 1980–1990, it was –0.1% during 1990–2000.

This article helped a lot with my Sierra Leone project. Mostly the argriculture products are rice, coffee, palm kernels, palm oils, and peanuts. For future reference :)Thanks.
2
Abu Bakar Zaki

With all productivity stated in this article is a promising to development in this country,but the unfortunate thing is that our agricultural professionals do not like work in the farms.These professionals are not ready to work in this noble career.All over the university graudates are doing practicals on farms- producing fertilizers,chemicals and so fort. What actually our professionals doing towards this.Agriculture is everybody's business.All the agricultural producing areas Ivisited,youths are suppose to be the major stakeholder in this occupation.They lazy,laziness is our majar sickness and diseases.Some, however, want to work in groups but the logistical
support and credit are not available.Govt to provide public farms.
3
augustinesaidu

sierra Leone agricultural development is a subject that is important to me so much, i am at the kenema district sierra Leone i am in JSS-3 at the college secondary school kenema, so any problem with my notes in school i will just visit my webs site OK thank you.
4
patrick terry

I want to disagree with this statment that "agriculture is the primary occupation in sierra leone in this modern days". After the civil war those who used to work at the field has migrated to the urban,living the ageable behind, and those who were unable to move at that time especially the male are now taking to transportation, to ride motobike [okada]. Then who are making the greater number at the field. Even those who went to colleges and studied Agriculture are not prepared to go to the field, to practice.
5
Patrick Saquee

I strongly support and agree with your report. The world today has got to a new stage and and realized that benefit behind agriculture. And most of the fastest growing countries today, passed through agriculture to survive their economy. And the reason that has encouraged many active and experienced youth in the field of agriculture today, is the aid of technology. Those who went to college before lack the support to stretch in to this, practically because they do not have the finance. But today, with many N.G.O round the world, there has been many encouragement in the field of agriculture that has invited many youth.
6
Amie Bangura

I am planning to go back to sierra leone and start doing farming ,reading this article really touch my heart and that life will be better for others even though i am planing to start my own business and i know its not going to be that easy.seating here in europe is not that also easy as we all know,and my target is forget about the city and live in the country side
8
ABDULAI BORBOR BANGURA

This article is very inspiring. I am already doing agriculture since 2011 around Kenema Kono border. I have about 4,000 stands of pineapple, some pea, mangoes, few plantain, cacao, cola etc. Unfortunately, thieves are always stealing my pineapple. I have no formal education in agriculture but my Father was a good farmer. I am doing lots of nursery presently and as such, I need expert advice