Niger's balance of payments deficit is usually offset by large amounts of bilateral and multilateral aid. A reduction of imports, combined with small increases in the value of uranium and other exports, is expected to improve the trade imbalance in the early 2000s.

The US Central Intelligence Agency (CIA) reports that in 2001 the purchasing power parity of Niger's exports was $246 million while imports totaled $331 million resulting in a trade deficit of $85 million.

The International Monetary Fund (IMF) reports that in 1995 Niger had exports of goods totaling $288 million and imports totaling $306 million. The services credit totaled $33 million and debit $152 million. The following table summarizes Niger's balance of payments as reported by the IMF for 1995 in millions of US dollars. 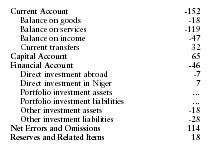