Paintings of animal figures on rock slabs in Namibia testify to at least 25,000 years of human habitation there. The San (Bushmen) may have been Namibia's earliest inhabitants. The Damara also claim to be the true indigenous Namibians, who were compelled to welcome waves of Herero and Ovambo from the north. By the 19th century, the Damara, Ovambo, and Herero were the largest indigenous ethnic groups. The Kavango and the Caprivians were settled in the areas where they now reside. There was competition for land, mostly between the Ovambo and the Herero. But then the invaders arrived. First came the Hottentots (now called Nama), brown-skinned peoples of mixed parentage from South Africa. They had guns and conquered a large swath of southern and central Namibia from the Herero and the Damara. The Germans came in 1883, initially as commercial colonizers and missionaries and then as soldiers. With military might, the 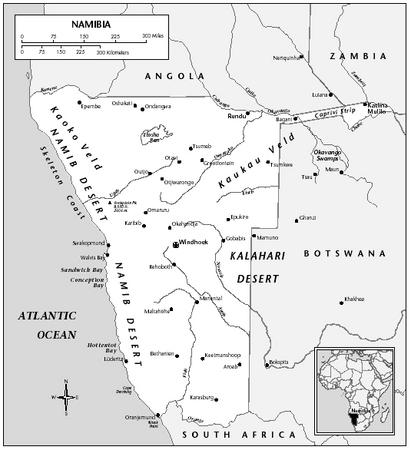 Germans in the 1890s moved inland across the desert from Walvis Bay (which had been annexed by the British in 1878 and incorporated into Cape Colony in 1884) to Windhoek, establishing forts and subjugating the Herero and Damara. The Germans forcibly took land and cattle from the Herero, whose revolt was suppressed by the Germans at a cost of about 65,000 Herero lives. A Nama revolt met a similar fate in 1904.

When World War I broke out, the South Africans invaded Süd-West Afrika, as the German colony was then known. The South Africans wished to annex the territory, but the new League of Nations granted South Africa a mandate instead. From 1920 to 1946, South Africa administered the mandatory territory as if it were an integral part of the Union, but neglected social services and the Ovambo-Kavango sphere in the north.

After World War II, South Africa refused to acknowledge the jurisdiction of the UN over Namibia as a successor organization to the League of Nations. Instead, it progressively integrated Namibia into the Union. In the 1950s, senators from South West Africa sat in the South African parliament. The UN took South Africa before the International Court of Justice, that gave ambiguous verdicts in 1962 and 1966, but in 1971 it decisively declares South Africa's occupation of Namibia illegal. In 1978, the UN Security Council rejected South Africa's annexation of Walvis Bay.

Meanwhile, in 1960, representatives of the indigenous majority had formed the South-West Africa People's Organization (SWAPO) to seek independence and black majority rule. Beginning in 1966, but especially after 1977, SWAPO used guerrilla tactics with varying success. South Africa countered by building up its armed forces along Namibia's borders with Zambia and Angola, where SWAPO had established bases and from where it launched raids.

In 1978, South Africa ostensibly accepted a Western-sponsored plan for an independent Namibia, but at the same time sponsored elections for a constituent assembly (opposed by the UN) that resulted in the victory of a white-dominated multi-ethnic party, the Democratic Turnhalle Alliance. Representatives of the United States, the UK, the Federal Republic of Germany, France, and Canada then attempted to devise a formula acceptable to South Africa that would permit Namibia to proceed to independence in accordance with UN Security Council Resolution 435 of 1978. Black African countries rejected South Africa's demand that Cuban forces leave neighboring Angola as part of a settlement.

A "transitional government of national unity," composed of South African-appointed members of six parties, was installed in 1985. The South African administrator-general retained the right to veto legislation, and South Africa continued to exercise authority over foreign affairs and defense. On 13 December 1988, seven months of US-mediated (with observers from the Soviet Union) negotiations, resulted in the signing by Angola, Cuba, and South Africa of the Protocol of Brazzaville, by which South Africa agreed to implement the UN Plan for Namibia. Cuba and Angola agreed to a phased, total withdrawal of Cuban troops from Angola. Further agreements on details were signed in New York on 22 December 1988.

The process to implement UN Resolution 435 on 1 April 1989 started off shakily. In contravention of SWAPO President Sam Nujoma's assurances to the UN to abide by a cease-fire and repatriate only unarmed insurgents, around 2,000 armed members of the People's Liberation Army (PLAN), SWAPO's military wing, crossed into northern Namibia from Angola. South African forces were authorized to oppose them and 375 PLAN fighters were killed. This misunderstanding was overcome by negotiations and peace was restored.

Elections, held 7–11 November 1989, were certified as free and fair. This transitional period involved the return some 42,000 refugees and the return of SWAPO politicians and PLAN fighters in exile. SWAPO took 57% of the vote, just short of the twothirds necessary to allow it a free hand in drafting a constitution. The main opposition Democratic Turnahalle Alliance (DTA) received 29%. By 9 February 1990 the constituent assembly had drafted and adopted a constitution based on the 1982 constitutional principles. Namibia became independent on 21 March 1990. Nujoma was sworn in as president by UN Sec. Gen. Javier Pérez de Cuéllar. Namibia's independence shines as a UN success story.

Since independence, the SWAPO government has pursued a policy of "reconciliation" with the white inhabitants. It is a vibrant multiparty, nonracial democracy. On 1 March 1994, the reincorporating of Walvis Bay into Namibia was completed through an agreement with South Africa.

By the late 1990s, secessionist sentiments were growing among the 92,000 Lozi of the Caprivi Strip in northeastern Namibia. They formed the Caprivi Liberation Front, led by Mishake Muyongo, former SWAPO executive secretary and DTA leader. On 2 August 1998, Caprivi Liberation Army (CLA) rebels attacked military, police, and other government installations around Katima Mulilo in Caprivi. Namibia declared a state of emergency that lasted three weeks. Six soldiers and police officers, and several civilians died in the attack. Many rebels were capturing or killed by security forces. By December 1998, 2,250 Namibians from the Caprivi region had crossed into Botswana, allegedly fleeing persecution by the Namibian Defense Force, and 2,232 of them were given asylum in Botswana. Mushoke and Chief Boniface Maunili got asylum in Denmark. In 2002, 128 Caprivians were being held for trial on charges of treason. By March 2003, despite assurances for their safety, none of the Caprivian refugees in Botswana had signed up for the next round of repatriations by the UNHCR and the government.

In November 1998, SWAPO used its two-thirds majority in Parliament to change the constitution to allow Nujoma a third term of office. This move attracted wide national and international criticism in what some observers called a "torpedoing of democracy" to suit certain individuals. Namibia's ambassador to Britain and high-ranking SWAPO member, Ben Ulenga, resigned in protest over this. In March 1999, he formed his own party, the Congress of Democrats (CoD). Nujoma went on to win the (substantially free and fair) elections held on 30 November and 1 December 1999, taking 77% of the vote and three-quarters (55) of the 72 parliamentary seats. The CoD (tied with DTA at 7 seats) won the highest number of opposition votes (10.5%). At its Congress in 2002, Nujoma was reelected head of SWAPO, which he has led for nearly 40 years. In June 2003, Nujoma declared that he would not stand for a fourth term— implying that a new party head would have to be chosen before the 2004 elections.

Namibia maintained neutrality in its foreign policy, until the late 1990s, when 2,000 Namibian solders were sent to help President Laurent Kabila of the Democratic Republic of the Congo fight rebels. By August 2001, all but 150 of these troops had returned home. In December 1999 Namibia allowed Angolan troops to use its territory to pursue UNITA rebels. Between December 1999 and January 2000, scores of civilians were wounded or killed. The death of UNITA leader Jonas Savimbi in February 2002 and the subsequent peace accord between UNITA and the Angolan government ended bouts of "hot pursuit" across the Namibian-Angolan border in connection with the quarter-century-long civil war in Angola.

In June 2003, Namibia was included in free trade talks with the United States as part of the Africa Growth and Opportunity Act (AGOA). It had also received $113 million over five years in assistance from the Global Fund to fight HIV/AIDS, and announced that local production of anti-AIDS drugs would soon begin—a measure that was expected to make life-prolonging drugs available and affordable to thousands of infected persons. The HIV/AIDS adult prevalence rate stood at 22%.