Mozambique has traditionally had a balance-of-payments deficit and relies heavily on imported consumer and capital goods. Imports have risen steadily since 1987, substantially increasing the current account deficit. In recent years, the merchandise import–export ratio has been as low as 1:4. Mozambique is taking steps to improve its trade balance, however, by increasing the production of locally manufactured and agricultural goods. By the early 2000s, exports had risen over 40% since 1996. A faster rise in export earnings has been hampered in part by bankruptcies in the cashew processing industry, and poor prices for the sale of electricity generated by the Cahora Bassa hydroelectric dam (resulting from contracts negotiated by the colonial government over 20 years). But as of the early 2000s, prospects for an increase in exports appeared positive.

In 1999, Mozambique qualified for $3.7 billion in debt service relief under the IMF/World Bank Heavily Indebted Poor Countries (HIPC) initiative. (The amount was subsequently augmented to $4.3 billion.) This debt relief improved the country's balance of payments. Prior to the HIPC approval, Mozambique owed $8.3 billion in foreign debt. HIPC reduced the eligible debts held by participating creditors by 90%, or close to $3 billion.

The US Central Intelligence Agency (CIA) reports that in 2001 the purchasing power parity of Mozambique's exports was $746 million while imports totaled $1.254 billion resulting in a trade deficit of $508 million.

The International Monetary Fund (IMF) reports that in 2001 Mozambique had exports of goods totaling $1.71 billion and imports totaling $2.44 billion. The services credit totaled $590 million and debit $1.4 billion. The following table summarizes Mozambique's balance of payments as reported by the IMF for 2001 in millions of US dollars. 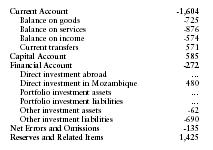