The Moroccan government announced plans in 1999/2000 to cut the budget deficit by one-third, in order to encourage investment and job creation. By 1998, only 56 of 114 companies slated for privatization had been sold, and the rest had been withdrawn from sale. The government did not depend on privatization revenues for funds, rather on the ownership of the phosphates industry. Nearly 50% of the state budget was spent on public sector salaries, and 25% on debt servicing in 1999. Some privatization has taken place in recent years, however, including the government's sale of 35% of the state operator Maroc Telecom and the liberalization of rules governing oil and gas exploration. 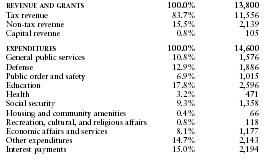