Transportation is controlled by the government's Malian Transport Authority. Mali has some 729 km (453 mi) of railroad, served by diesel electric locomotives. The main line, from Dakar in Senegal to Bamako, runs a twice-weekly passenger service. There is more frequent service between Bamako and Koulikoro, the last stop on the line, and between Bamako and Kayes. The IBRD has helped finance the modernization of the Malian rail system. Mali's road network includes about 15,100 km (9,383 mi) of highways of which some 1,827 km (1,135 mi) were paved as of 2002. A major project, completed in 1986, was the construction of a 558-km (347-mi) road between Gao and Sévare, near Mopti, to be part of a trans-Sahara highway linking Algeria and Nigeria. In 2001, there were about 18,900 passenger cars and 31,700 commercial vehicles in Mali.

Mali is landlocked; it is served by the port of Dakar in Senegal. The Niger River, which in Mali is 1,782 km (1,107 mi) long, is navigable except for a 59-km (37-mi) stretch between Bamako and Koulikoro (the main river port), where it is cut by rapids. The Bani River, a tributary of the Niger, is navigable for 224 km (139 mi) between San and Mopti. Regular service on the Niger is generally maintained from July through January. The Senegal is navigable between Kayes and Saint-Louis, Senegal. Mali, Senegal, and Mauritania make up the Senegal River Development Organization.

There were 27 airports in 2001, only 7 of which had paved runways. An international airport is at Senou, 14 km (9 mi) from Bamako. Air Mali, the state-owned airline, flies to Gao, Mopti, Kayes, Nioro, Tombouctou, Nara, Yelimané, and Goundam. There are also airports at Ségou, Tessalit, Bourem, and Kidal. In 1992, Mali joined the ten other signatories of the Yaounde Treaty and became a partner in Air Afrique. In 2001, 46,400 passengers 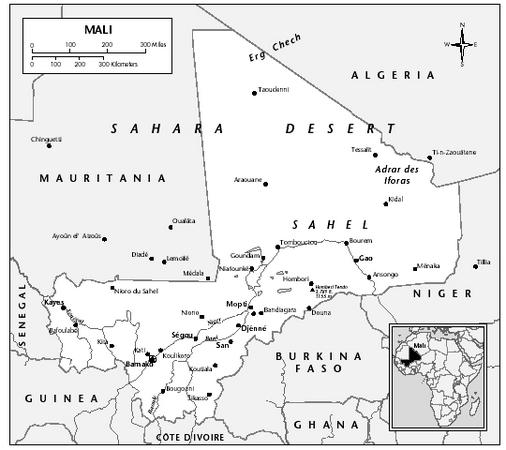 were carried on scheduled domestic and international airline flights.

Thank you very much! I needed info for mali transportation for my french project and this was great!