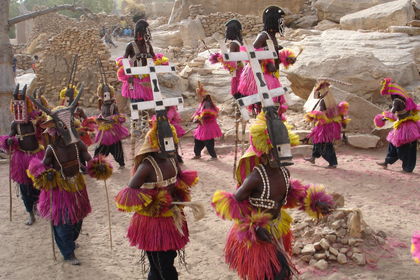 The recorded history of the area now called Mali begins with the empire of Ghana, which is said to date from the 4th century AD . At its height in the 10th century, it occupied eastern Senegal, southwest Mali, and southern Mauritania and carried on a steady trade across the Sahara with Arab states. The Ghana Empire disintegrated by the 13th century and was succeeded by the Mali Empire, from which the independent republic takes its name.

The Mali Empire reached its peak in the 14th century under Mansa Musa (r.1312–37), who captured Tombouctou and made Mali a center of Muslim scholarship. Tombouctou and Djenné became key centers for trans-Sahara trade. By the 17th century, however, the empire had ceased to exist, and the Tuareg took much of the northern area.

Meanwhile, to the east, the Songhai Empire was founded around AD 700 on the middle Niger. Later centered at Gao, the empire was at its zenith after the capture of Tombouctou in 1468. The chief rulers in this period were Sonni 'Ali Ber (r.1464–92) and Askia Muhammad I (r.1492–1528). In 1591, the Songhai fell to an invading Moroccan army, which established secure bases at Gao, Tombouctou, and Djenné. Under Moroccan rule, a military caste known as the Arma developed, which controlled the countryside, but by 1780, the area had become fragmented into petty states.

In the 19th century, al-Hajj 'Umar, a member of the Tukulor tribe, waged a Muslim holy war against the pagans of the area. In 1862, he conquered Ségou and Macina, and the next year he plundered Tombouctou. He was killed in 1864 trying to put down a rebellion. Around 1880, the French began their advance into what was to become the Republic of Mali. They were opposed from 1882 to 1898 by Samory Touré, a Malinké (Mandingo) leader who was ultimately captured and exiled. The capture of Sikasso in 1898 completed the French conquest.

Under French administration, the area became known as French Sudan (Soudan Français) and was a part of French West Africa. Achievements of French rule included the building of the Dakar-Bamako railway and a Niger Delta development scheme. In 1946, the Sudanese became French citizens, with representation in the French parliament. Under the constitution of 1946, the franchise was enlarged and a territorial assembly was established. Universal suffrage was established in 1957, when enlarged powers were conferred on the territorial assembly, which was also given the right to elect a council of ministers responsible for the administration of internal affairs. In 1958, under the constitution of the Fifth French Republic, French Sudan became an autonomous republic, called the Sudanese Republic, within the French Community.

In January 1959, in Dakar, representatives of the Sudanese Republic, Senegal, Dahomey (now Benin), and Upper Volta (now Burkina Faso) drafted a constitution of the Federation of Mali (named after the medieval African empire), but only the assemblies of the Sudanese Republic and Senegal ratified it and became members of the federation. Later that year the new Mali Federation asked the French Community to grant it complete sovereignty while permitting it to remaining a member of the Community. The Mali Federation became a sovereign state in June 1960.

Discord soon arose over external and internal policy, and on 20 August 1960, the federation was dissolved. On 22 September 1960, the Sudan declared itself independent as the Republic of Mali. Modibo Keita, a cofounder of the African Democratic Assembly and political secretary of the Mali Federation's African Federation Party, took control of the government. The break with Senegal was followed by the decision to leave the French Community. All ties between Senegal and Mali were severed, and Mali embargoed trade with or through Senegal until 1963, when an accord was reached.

The one-party dictatorship led by President Keita evolved into a socialist regime modeled on that of the People's Republic of China. However, by 1968, economic problems and discontent became severe. On 19 November, Keita was overthrown in a bloodless coup led by Lt. (later Gen.) Moussa Traoré. The 1960 constitution was abolished, and a 14-member Military Committee for National Liberation took command. The junta brought Mali back into the franc zone in 1968 and opened its doors to investment from nonsocialist as well as socialist countries.

Lt. Traoré became president in 1969, following an interim period of Yoro Diakité's presidency. (Diakité was expelled from the Military Committee in 1972 and died in the prison salt mines of Taoudenni in 1973.)

The military regime's efforts to improve the economic situation in Mali were frustrated by the prolonged period of drought that began in 1968 and peaked in 1972–73. It was estimated that, during that time, one-third of the population was rendered destitute. Severe drought conditions also prevailed in 1982–85.

In 1978, 29 army and police officers were convicted of plotting against the regime, and political unrest continued in later years. Traoré was elected president in 1979 under a new constitution, which also confirmed Mali as a one-party state. He was reelected in 1985. Fighting broke out between Mali and Burkina Faso on 25 December 1985 over possession of the Agacher Strip, an arid tract of land along their common border. About 65–70 men were killed before a cease-fire on 30 December. On 22 December 1986 the International Court of Justice, to which the dispute had been submitted in 1983, divided 2,952 sq km (1,140 sq mi) between the two countries in roughly equal parts.

On 26 March 1991, Lt. Col. Amadou Toumani Touré engineered a coup that toppled the Traoré government. Following bloody confrontations between youth groups and the army in 1990 and 1991 in which more than 200 were killed, Touré immediately set up a National Reconciliation Council which appointed a broad-based Transitional Committee for Popular Salvation to oversee the transition to civilian democracy. In May 1991, a public trial broadcast over Malian radio eventually resulted in the conviction (February 1993) of former President Traoré and three associates, who received a death sentence for the March 1991 massacres.

A crisis was averted by a National Conference, which included 48 political parties and some 700 civic associations. The participants met from 29 July to 14 August 1991, drafting new electoral rules, party statutes and a new constitution, which was adopted by referendum in January 1992, and established an agenda for the transition. There were elections for municipal councilors and National Assembly deputies and, finally, presidential elections on 12 and 26 April 1992. Dr. Alpha Oumar Konaré, the leader of the Alliance for Democracy in Mali (ADEMA) became Mali's first democratically elected president with 69% of the vote. The Third Republic was launched. ADEMA also won 76 of the 116 National Assembly seats.

One of the last acts of the Touré transitional government was to negotiate (with Algerian mediation) a peace treaty in April 1992 with rebel Tuaregs in the north. The government acknowledged the Northerners' special status, and the Tuaregs renounced their claims to independence. Algeria agreed to guarantee the truce, which ended two years of fighting. In 1992 and 1993, between 60,000 and 100,000 Tuareg refugees returned from abroad. In February 1993, the government and the rebel group, the Unified Movements and Fronts of Azawad (MFUA) agreed to integrate MFUA guerrillas into the national army and, in May 1994, arrived at a further agreement to implement the 1992 National Pact. In May 1995, President Konaré personally visited refugee camps in bordering states in an effort to assure Tuareg refugees that it was safe to return home. In March 1996, after 3,000 Tuareg rebels had been integrated into the military, there was a massive ceremonial burning of their surrendered weapons in downtown Tombouctou. In January 2000, some 1,000 Tuareg returned home to northern Mali from Niger.

A culmination of pressures led to a new government in April 1993. Abdoulaye Sekou Sow replaced Younoussi Touré as prime minister, and the National Congress of Democratic Initiative (CNIT) took a portion of the ministerial portfolios. However, this government was short-lived. Student disgruntlement with the economy, high unemployment, the negative effects of structural adjustment, and the devaluation of the CFA franc contributed to much popular dissatisfaction, and to the fall of the Sow government in February 1994. In the subsequent government, ADEMA took 11 of the 16 ministries. Several ADEMA members left the party following Ibrahim Boubakar Keita's election as secretary of ADEMA and his appointment as prime minister. The detractors formed the Movement for Independence, Renaissance, and African Integration (MIRIA). The Patriotic Movement for Renovation (MPR) was also formed at this time, along with a splinter from the CNID, the Party for National Liberation (PARENA). Upset with the pace of reforms, students continued their violent unrest, resulting in the January 1996 arrest of several student leaders. The crackdown was widely criticized, and in late January 1996, the CNID introduced a motion of no confidence in Parliament, which the government this time was able to survive.

Malians took a step toward national healing in January 1999 when President Alpha Oumar Konaré commuted death sentences imposed on Traoré and his wife after they were convicted of embezzlement. The successful rural community elections of May/June 1999 strengthened Mali's quest for decentralized democracy. In spite of the low voter turnout caused by the boycott of the radical left, opposition groups won nearly 40% of the 10,000 council seats, though none of the parties won more than 10% of the seats. Given this new avenue for political participation, observers felt that the radical left, grouped under the Collectif des Partis Politiques de l'Opposition (COPPO), marginalized by its boycott, would want to contest future elections.

In February 2000, President Alpha Konaré announced a new national government spearheaded by Prime Minister Mande Sidibe, whose main task was to relaunch the economy. Konaré's cabinet included seven women, and seven colonels. Six former ministers remained in government, including Foreign Minister Modibo Sidibe. Despite criticisms of corruption and failed economic policies, under Konaré, government became more representative and responsive to citizens. Society also became more open to debate. More than 40 newspapers including 4 of 5 daily papers were privately owned. Although the state controlled television, some 15 private radio stations operated in Bamako, and more than 40 stations broadcast freely up-country. Having served as chairman of ECOWAS, and being one a few African heads of state to stand down after completing his constitutional term of office, Alpha Konaré enhanced Mali's reputation internationally.

On 28 April 2002, Amadou Toumani Touré, nicknamed "ATT," emerged the leader of the first round presidential election with 29% of the vote, defeating former prime minister and rival, Ibrahim Boubacar Keita. In the run-off election on May 12, he obtained 64% of the vote, defeating Soumalia Cissé to become the second democratically elected president of the Republic of Mali. Eleven francophone African leaders witnessed the transfer of power from one constitutionally elected president to another— the first in Mali's history.

this artical told me alot of information i think i will use this artical alot and it is a good source for this project iam doing.

I am doing a project on Mali and I found this information useful. I really want to help out even though they are doing pretty good today. I would like to send money and letters to the children and familys to let them we think about them here in America.
3
Kalif Keita

THIS ARTICLE RATHER CONTAINS KEY INFORMATION CORROBORATING THAT I ALREADY KNEW ON MALI
4
Adenike s.

MALI IS A VERY SPECIAL PLACE AND IT HAS ALOT OF HISTORY THAT PEOPLE SHE TAKE THE TIME AND READ AND LOOK AT
6
desssi!

:) thanks! im in such a hurry to finish my report on Mali and this helps alot!! :)
7
kabonde Brian

This article is well written and it has helped me in my research.
8
Bobbi

It had great information thanks for writing this everything about it was great no mistakes at all. THANKS :)
9
santo catrin

I was thinking to be going to Bali but it is sounding very agritated. Please to tell me when is calming down so I can see the temples and eat some gado-gado
10
Samba L Bah

I am interested in knowing African history especially West Africa. The culture .food, Cloths and traditional medicines,
My Continent is the best when it comes to resources and good behaviors.