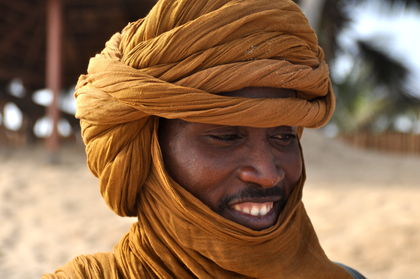 The main ethnic groups of Mali are the Mande, including the Bambara, Malinke, and Sarakole, accounting for 50% of the total population. Other groups include the Peul (or Fulani), accounting for 17%; the Voltaic, making up 12%; the Songhai, constituting 6%; the Tuareg and Moor 10%; and other groups 5%. The Bambara, mostly farmers, occupy all of central Mali bounded by the Côte d'Ivoire frontier in the south and Nara and Nioro in the north. Malinke live chiefly in the regions of Bafoulabé, Kita, and Bamako. The Peul (or Fulani), semi-sedentary herdsmen, are to be found throughout the republic, but mainly in the region of Mopti. The Songhai—farmers, fishermen, and merchants—live along the banks and islands of the Niger River, east of the inland delta. The nomadic Tuareg, of Berber origin, are mainly in the north, in the Adrar des Iforas. The Minianka, largely farmers, populate the region of Koutiala, and the Senufo, also farmers, are found principally in the region of Sikasso. The Dogon, often considered to be the first occupants of Mali, are believed to have survived owing to the inaccessibility of their villages in the Hombori cliffs. The Dogon have won international esteem for their unique ceremonial artifacts. The majority of the peoples in Mali are Negroid; the Tuareg are classified as Caucasoid; and the Puel (Fulani) are of mixed origin.

ok i am doing this report paper on the culture of mali and this is very helpful!!!
3
caroline

great item. got malian friend. having remarkable time with him. amazing.
4
Mohamed

I'm from Mali, I'm Bambara and I agree with the content of the summary. However, I would like the author to go further in details and give some citation as to the percentages of population attributed to each group.

thank alot you helped me w/ my world expo project i would defenetly recomend you to a friend
7
me, myself,and I

this helped alot. i'm doing a project about mali, africa in social studies and this is going to up my grade alot.

Thanks a ton! Helped me with spelling some of these tough names on a transcription I'm doing.
10
Michaela

This helped me a lot with a project of Mali! I gives a lot of information about the ethnic groups of Mali.
11
monica dubenodrf

Unfortunately, the name "Tuareg" can be considered a pejorative along with "Bushmen" for San people and "Eskimo" for Inuit people. The best term for this ethnic group is Tamasheq.
13
Dolire o. Kunle

Nice work,it places more insight to Mali while inundated me in my research work.thanks
14
Iesha

This is very helpful on my Africa research on mali.
15
Uzajja Dauda

It is a rich resource for the research I am currently carrying.
16
me

thanks so much. this help he heaps with my mali project. thanks again whoever you are
17
Ahmed Mohammed

I'm looking for a map showing what tribes/ ethnic groups live in and near Gao.
19
Alhaji Mohamed Fofana

Hi.
I'm a Mandinka born to Malian and Guinean parents in Sierra Leone.
I can't understand this segregation between who's a Mandinka/Mandingo/Malinke as in French, Dioula/Dyula, and Bambara.
In Sierra Leone, we are referred to Mandinka/Mandingo, but we use all these nomenclatures.
We speak the same language. Is this done in order to under report our population?
I can't imagine this.
I just know it's the same people using different nomenclatures. Thanks!