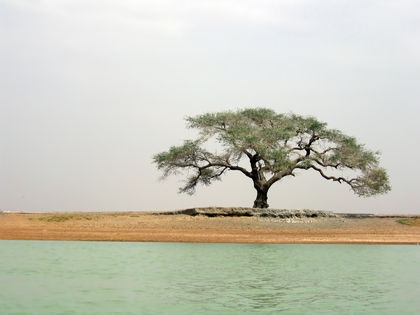 Southern and western Mali have a Sudanese climate with a short rainy season from June to September. Rainfall averages 140 cm (55 in) at Sikasso in the far south. To the north is the Sahelian zone, a semiarid region along the southern border of the Sahara. At Gao, in Mali's northeast Sahel, rainfall is about 23 cm (9 in) a year. Actual year-to-year rainfall, however, is extremely erratic. In the Sahelian zone there are considerable variations of temperature, especially in April, May, and June, the period of maximum heat, and in December, when the hot, dry harmattan blows. Continuing north, one gradually enters into a Saharan climate, marked by the virtual absence of rain and an extremely dry atmosphere. Over 40% of the country is, in fact, desert, and unsuitable for agriculture. The year is divided into three main seasons varying in length according to latitude: October–January, a cool and dry season; February–May, a hot and dry season; and June–September, a season of rains characterized by lower temperatures and an increase in humidity. Between 1968 and 1974, Mali, with neighboring Sahel states, experienced the worst drought in 60 years. Drought returned during 1982–85, and there is continuing concern over the southward advance of the desert.

Great site! I found a lot of information that I needed, thanks!
2
kelsey

This was a great way to help me with the climate for my report.
thankss!
4
kinsey (i love happiness)

gee, thanks for all of your kind help !!! you really know how to give some information!!! :D
5
bob

Thanks for all your help, i really found a lot of info!
6
Aleyah

i had a current event on Mali, and this was the best site yet!
7
robert

thanks this was a wonderful way of resource. thank you alot
8
munchkin

i also have to do a report on mali for school! This helped me tunz!
9
Carolina

I have to do a project about Mali, and one of the requirements was "What is the climate of Mali?", so this was very helpful. Thanks.
10
Dans

Yea I had to do a major project for school and the only thing i couldnt find was the rainfall and this helped me gat an 110. =-) thanks alot
11
marie

I ALSO HAD TO DO A PROJECT ON MALI AND THIS WAS LIKE A LIFESAVER!! THXX

this is so awsome we had to do this at triway school and this website has really helped us and we love this so much. bri and paige
15
ashley

i really liked this site. i had a project on mali and this is the only site i had to use because it had all of the information!!! thankss!!
16
Erin

wow, thanks sooo much!
This report really helped me with my brochure of Mali!
17
hannah hinton

so like i have this teacher and we had to do a report out of mali,ghana,and songhai and i chose mali i searched every wear and this was very useful for me and if your wondering what i got i got a 100% thanks to this site well bye
18
chrisy

This was great INFO for my report so this could actually help many other kids in school do as great has i did
P.S XOXO
19
via

thank you sooo much. I have to do a report on mali. a BIG report. and this helped me greatly! thanks ;D
20
Chris

Wow this was a useful site. I procrastinate too much and didn't start my project until the day before it was due, so this helped me get all the information I needed quick and easy. Thanks!
21
Uzair

I had to do a report on mali and this helped pretty muchi don't know what i got yet hope it is good .work is in progress
23
deuce

this really helped me so much i dont have that far to go now on my report!!!yaya
24
Henry P.

Oh, you wouldn't believe this, I read it few weeks ago and then I took my master degree's test and all I could remember is your web and now they announced me to get ready to get my Ph.d! Thanks a lot, and say hi to Peggie for me.
25
Amanda Robinson

Thanks alot for the info!
I have to do a project on Mali.
I would have loved it if you would have been more general but overall you did a great job and thanks for the info!!!
26
paulo

Thank you for the help this website could not be better.
27
max

Very nice report! Needed it for a school project aswell. Thank you very much!
28
arianna welch

okay i FORGET TO TELL EVERYBODY I FINISHED MY PROJECT AND GOT AN a PLUS THANKS FOR THE SUPPORT I APPRECIATE IT :)
29
Nikoli

Thank you very much. I had to do a french project on Mali and this gave me a fantastic imformation about the climate, Thanks!
32
lexie

This website is awsome i love it i dont even have homework on mali but i just love looking up random stuff and learning about it.
34
Jennifer

Haha thats so ironic becuase i am having to do a report on Mali too. Im in 7th grade what about you?
36
Dhruv

Nice, I had to write a report on Mali and this was really helpful
37
Kamarudin

Hi Friend, can I get an idea of cost of living, living conditions and more details on Mali climate please???
38
Rohan

Haha. I was reading up on a few things and came across this. :)
40
LouisTomlinson

Thanks this will help my friend on her report!
-LouisTomlinson
41
The_Guy_They_Call_Jeff

This website has helped me a lot.
Really helpful.
This helped me get better Grades in school and also its getting me prepared for what's to come when I do my GCSE's in 2 years time :):):):) xD