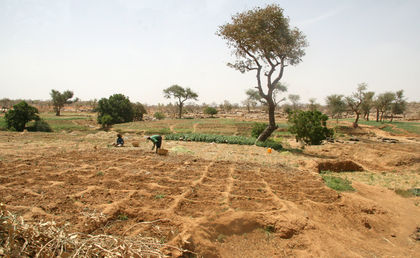 Only the southern part of Mali is suited to farming, and less than 2% of Mali's area is cultivated. Agriculture accounted for about 45% of GDP, 21% of exports, and over 80% of the active labor force in 2001. Millet, rice, and corn are the basic food crops. Millet and sorghum are cultivated mainly in the areas around Ségou, Bandiagara, and Nioro. Paddy rice is cultivated on irrigated farms in the area around Mopti, Ségou, and Niafounké. Cereals are produced for subsistence by 90% of farmers. Peanuts are grown in the Sudanese zone, as are cotton, fruits, vegetables, and henna. The shea tree nut, which grows wild, is exploited by Malians for its oil.

The Niger Office, now a state-controlled agency, was set up in 1932 to aid in improving cotton and rice production. It developed the irrigation and modern cultivation of some 81,000 ha (200,000 acres) in the dry inland delta of the Niger; in 1998, about 138,000 ha (341,000 acres) in Mali were irrigated. The infrastructure includes a dam (2.6 km wide/1.6 mi), irrigation canals, ditches and dikes, and such installations as housing stores, warehouses, rice and oil mills, cotton-ginning factories, sugar refineries, soap factories, research stations, schools, and dispensaries. Growing cotton in irrigated fields did not succeed and was abandoned in 1970. All cotton is now grown in nonirrigated fields in the regions of Bamako, Ségou, and Sikasso.

This was a great website!!!!! it helped me soooo much for my paper on Malian food and production!!!!!
2
JJ n' Scooter

This website helps me with my social studies project on Mali! its awsome! Kepp up the awsome work! I'll be back to use this site again, (because are projects arn't over yet!) thanks!
3
Melanie

Thanks for the information! It really helped me with my research paper. I would suggest adding some more information (ex. author, date of article, etc) that would help me site it more efficiantly. Thanks again!
4
ut

Wow, did this hlp or wht thx that was totaly gr8 it hlpd a lot! LOL
5
Dina

wow this helped me alot with the info i needed on Mali thnx.
6
Yoshi3329

Thanks for the information I'm sure this will help many people in the future.
7
becky

that rely helped me with my social studdies home work! thank you
8
antwan

Hii, thanks for the help I neeeda it love -jenny and christina . :)
11
Hara Kumar Reddy

This site was very helpful , i made a "A" on my project , i will tell others use this website
15
Travis

THE WEBSITE IS GREAT. THIS SITE WAS VERY HELPFUL, I WILL SHARE THIS SITE WITH OTHER CLASSMATES
17
Carrie

Do they grow cocoa beans and coconuts bananas and any other tropical fruit grown in
Mali?
19
Aidan

Yes, this was VERY helpful in my Malian study paper!