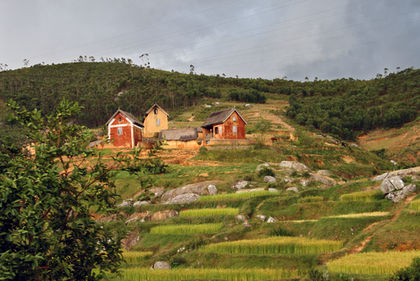 Although Madagascar's economy is essentially agricultural, much of the land is unsuitable for cultivation because of its mountainous terrain, extensive laterization, and inadequate or irregular rainfall. Only about 5% of the land area is cultivated at any one time. Despite these figures, agriculture accounts for 30% of GDP and employs about 75% of the work force. Large-scale plantations dominate the production of sisal, sugarcane, tobacco, bananas, and cotton, but, overall, Malagasy agriculture is dependent mainly on small-scale subsistence farmers cultivating less thanoneha (2.47 acres) of land.

Vanilla is the second-ranking agricultural export, with exports of 853 tons of extract (for a value of $9.5 million) in 2001. International trade in natural vanilla is determined by agreements between producers (mainly Madagascar and the Comoros) and the principal importers by which export prices and traded volumes are fixed. The government does not encourage overproduction, since the international market demand is very sensitive because of competition from synthetic vanilla (vanillin). Madagascar is the world's major natural vanilla producer, accounting for about 75% of production.

Cloves are the third main export crop, grown mostly by smallholders. Production follows a 4-year cycle with 2–3 years of high output followed by one year of low production. Clove exports totaled 16,723 tons in 2001, valued at $88.5 million. Other 1999 production figures for cash crops were seed cotton, 33,000 tons; peanuts, 34,000 tons; sisal, 18,000 tons; and cocoa, 4,000 tons. Pepper is another important export crop. Pepper exports in 2001 amounted to 635 tons, valued at $1.2 million. The sugar sector has been revived with the help of French investments. The needs of the domestic market are served by five sugar refineries.

Production of cash crops has been discouraged by the low prices paid by state agencies, which sometimes have failed to collect crops or pay for them on time. In 2001, Madagascar's agricultural trade surplus was $21.5 million.

this is a great site keep up the great work from tori Yates.
2
QT

i luv this page it saved my life(well, my homework)they should make more websites like these.=)
3
Krystal

i definitley most agree with QT, it's very helpful and more sites should be like this, definitley earns a top space for bibliography :)
4
Jp95

This Website is very helpful with homework!!!!!!!! This helped me alot!
5
shannon

this page is helping me majorly with a huge project!! people need to make more pages like these. =]
6
MBeringer

i agree with the people that said this website saved their lives...well it did save me for my homework...it gave me alot of info for a speech i had to give in front of the class...keep up the good work
7
KCris

great help, really useful!!!really helped me with my project, and gave me a better understanding of madagascar economy. keep it coming!
9
pinkyj0

this is some really usefull stuff! i know that if i ever have a nother project to go here first. its the best site i seen so far. not to sound like ive been commeting on a lot of stuff. but i can reaallly see that the comments arnt woth much but i hope the is. it really helped me with my afican scapbook.
10
SJM

this is an awesome website and it saved my homework. they really need more websites like this
11
AMIT JINDAL

please kindly mail me more information on agriculture business in madagascar.
also inform me how to get visa to visit madagacar. Also keen to now about fishing industry in madagascar.i am a sri lankan.

Great article! It saved my life for a social studies project on madagascar and has great info thanks dude!
15
Sally

This I a totally great site I am doing my world's fair on madagascar and this helped me a lot!!! THANK YOU!!!
16
Tifftoff

good web page, very helpful. not really what i was looking for but close enough. overall great page.
18
Scarlett-rose

This is an amazing website like what many others said it helped with a project I am doing. Very helpful not exactly what I was looking for but definitely great.Been researching for ages found some great websites but this definitely the best. I really appreciate you
19
Lauryo

Vanilla is not listed as an important food crop, but it is the second-ranking agricultural export, so how important is vanilla to the Malagasy economy??
20
Bob

This information was so helpful :)
it answered all my questions
thanks
21
g

Who is the author of this article? I would really like to know.