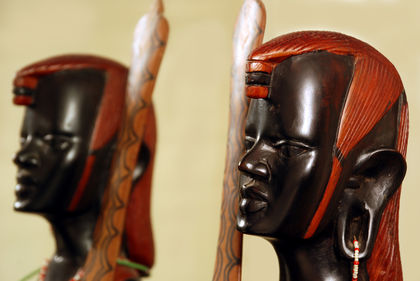 The early settlers, freed American slaves, brought with them the culture and religion of the US deep South of the slavery era. Their descendants are adherents of the principal Protestant denominations, of which the largest is the Methodist Church. In 2002, it was estimated that about 40% of the population practice Christianity or elements of both Christianity and traditional indigenous religions. Christian denominations include Lutheran, Baptist, Episcopalian, Presbyterian, Roman Catholic, United Methodist, African Methodist Episcopal (AME), AME Zionists, and several Pentecostal churches. About 20% of the population practice Islam. Mandingo traders, who live mainly in the northern and eastern counties, have made many Muslim converts and Egyptian and Pakistani Muslim missionaries have been active since 1956. About 40% of the population practice traditional indigenous religions exclusively. Veneration of ancestors forms the core of most Liberian traditional religion. There is also a small Baha'i community.

Though the law prohibits religious discrimination, there have been reports of violence and discrimination against Muslims and Islamic leaders complain of both social and political discrimination.

Hallo my name ariz, and I am from Indonesia, I am interested with one country in west afrika specialized Liberia and I want to explore the culture and the traditional religion which they had. So can you give me some information about Liberia. I just want to know, how many kind of traditional religion or indigenous beliefs which still exist in Liberia? And could you explain all that for me? Thank you very much. I hope you can help me so you can send the answer to my email. And my email address is: aristoteles_yunani@yahoo.com
2
sara

Liberia is the only west African nation that was never a colony
3
Kimmy Luvs Youh!!!

Hi it's Kimmy i love to learn about the world!!!Thanks for the information :)
4
the gnome

hey, thanks for this amazing information! I'm writing a report about Liberia, and this was a major help with the Religion. So once again thank you!