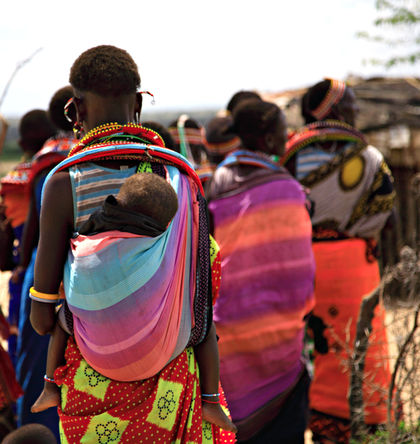 African peoples indigenous to Kenya, who now form 98% of the population, fall into three major cultural and linguistic groups: Bantu, Nilotic, and Cushitic. Although most of the land area is occupied by Cushitic and Nilotic peoples, over 70% of the population is Bantu. The Luo, a Nilotic people, live in an area adjacent to Lake Victoria. Other Nilotes—Turkana, Maasai, Pokot, Nandi, Kipsigis, and Tugen—occupy a broad area in the west from Lake Rudolf to the Tanzania border. Cushites such as the Galla and Somali live in the eastern and northeastern parts of the country. The Bantu reside mainly in the coastal areas and the southwestern uplands; the most significant Bantu peoples are the Kikuyu, Kamba, and Luhya. The Kikuyu, who constitute the largest single ethnic group in Kenya, live for the most part north of Nairobi and have played a major role in the nation's political and social development. The estimated proportions of the major groups are Kikuyu 22%, Luhya 14%, Luo 13%, Kalenjin 12%, Kamba 11%, Kisii 6%, and Meru 6%. Other Africans constitute 15% of the total population.

Non-Africans (Arabs, Asians, and Europeans) account for no more than 1% of the population. The Arab community is centered on the Indian Ocean coast. The Swahili, a group of mixed Arab-Africans with a cultural affinity to the Arabs, also live in the coastal region. Most Asians in Kenya have origins traceable to the Indian subcontinent; living primarily in urban centers, they consist of at least 31 culturally separate groups but make up less than 0.4% of the nation's population. The European community, which has rebounded since the 1960s, is primarily of British origin. About 12% of the Europeans hold Kenyan citizenship. A 1984 law provides that people born in Kenya of non-Kenyan parents can no longer claim Kenyan citizenship.

thank you so much for the wonderful information on kenya's ethnic groups. i got a very good grade in my social studys
3
love

i appreciate with what you have written,but i have an objection for what you have wrote about an ethnic east african group, i mean you have wrote the word "Galla", this word is used by the former emperial state of Ethiopia to insult one of its ethnic group,...today, no one uses this word, even now aday in Ethiopia, those who use "galla" instead of "OROMO", will be punished, which is considired as an offensive,...so, as an advice, would you use the word OROMO instead of "Galla", thanks alot.for more information contact as
onug2007@hotmail.com
4
Byabasaidja hassan

I WANT TO PROVIDE ME ALL THE AFRICAN LUO BOOKS OR COURSES.
5
tori

It's basic but I don't understand the word "arap", used in naming people . Would you explain it to me.. please?
7
harshitha

thank u so much for this i got very good grades for my history project :D
8
miquael

Thankyou again for the ethic groups and culture in kenya. I really needed this because it really steped up my grade. Thankyou!!! alot.
9
aaliyah cunningham

I think some of the percentages may be incorrect; for instance, the Kikuyu make up 17% , Kalenji, 10% Luo10% Kamba 10% and Meru 4%of the total population- This is according to a recent research (will find it & post it here shortly)
(i however stand to be corrected)
Wonderful website.
--thanks! :)