Lack of an adequate transportation network has hindered the country's development. Altogether, rail trackage totals 1,086 km (675 mi). The state-owned, meter-gauge, single-track railroad from Conakry to Kankan (663 km/412 mi) was built between 1900 and 1914; it is in disrepair and no longer able to carry heavy traffic. As of 1991, the railway was being rehabilitated with French assistance. A standard-gauge track of about 112 km (70 mi) along this line, between Conakry and Debélé, near Kindia, links the port and the OBK bauxite mine. The Friguia Mining Co. built and maintains 144 km (89 mi) of railway between the Fria mines and alumina works and the port of Conakry; the Boké mining operation constructed a 135-km (84-mi) railroad linking its deposits at Sangarédi with the port of Kamsar. Of 30,500 km (18,953 mi) of roads, some 5,033 km (3,128 mi) were tarred in 2002. There were 23,155 automobiles and 13,000 commercial vehicles in 1995.

Conakry has a natural deepwater harbor that handles foreign cargo (mostly bauxite and alumina). Port modernization is scheduled with aid from the IDA, the African Development Bank, and the Federal Republic of Germany (FRG). A deepwater port at Kamsar, completed in 1973, handles the output of the Boké bauxite mine, as much as 9 million tons a year. There are lesser ports at Kassa, Benty, and Kakande. Most rivers are of little value for navigation. A national shipping line is jointly owned with a Norwegian company. 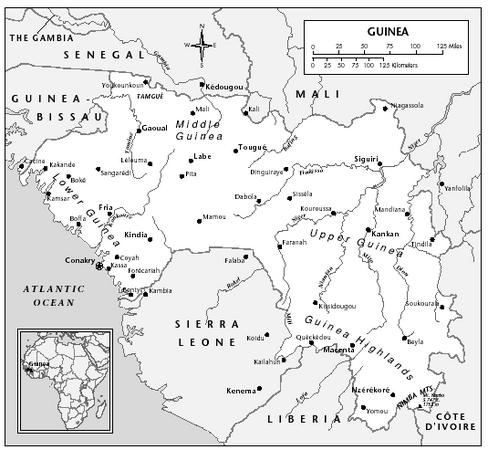 In 2001, there were an estimated 15 airports in Guinea, 5 of which had paved runways. Conakry's airport, Gbeesia, handles international jet traffic. Gbeesia, three smaller airfields at Labé, Kankan, and Faranah, and a number of airstrips are served by the national carrier, Air Guinée, which also flies to other West African cities and carried 36,000 passengers on domestic and international flights in 1997.

Appreciate any related information for our reference.