Bantu peoples began to migrate to what is now Gabon from Cameroon and eastern Nigeria at least 2,000 years ago. The Portuguese sighted the coast as early as 1470 and gave Gabon its name because the shape of the Rio de Como estuary reminded them of a "gabao," a Portuguese hooded cloak. The Portuguese 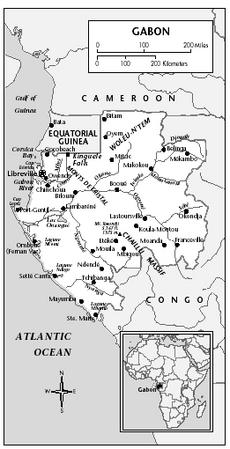 founded permanent outposts, notably at the mouth of the Ogooué River, and their missionaries followed shortly. After the Portuguese, the region was visited by the English, Dutch, and French. During the 17th century, the great French trading companies entered the slave trade. French Jesuit missionaries were active along the coast during this period, and their influence eventually extended to the powerful native kingdoms inland.

The abolition of the slave trade by France in 1815 ruined many merchants but did not end French interest in the Gabon coast. French vessels were entrusted to prevent the illegal slave trade, and the search for new products for trade led to French occupation of the coastal ports. In 1839, the French concluded a treaty with Denis, the African king whose authority extended over the northern Gabon coast, by which the kingdom was ceded to France in return for French protection. A similar treaty gained France much of the southern coast below the Ogooué, and gradually other coastal chiefs accepted French control. The present capital, Libreville ("place of freedom"), was founded in 1849 by slaves who had been freed from a contraband slave runner.

French explorers gradually penetrated the interior after 1847. During 1855–59, Paul du Chaillu went up the Ogooué River, where he became the first European to see a live gorilla. He was followed by the Marquis de Compiègne, Alfred Marche, and other explorers, who mapped out its tributaries. Pierre Savorgnan de Brazza explored almost the entire course of the river during 1876–78. In 1880, he founded Franceville. In 1885, the Congress of Berlin recognized French rights over the right bank of the Congo, an area that Brazza had explored extensively. In 1890, Gabon formally became a part of French Congo. It was separated into a district administrative region in 1903 and in 1910 was organized as a separate colony, part of French Equatorial Africa. In 1940, Free French forces ousted the Vichy government from Gabon.

Léon Mba and Jean-Hilaire Aubame were the early leaders of the independence movement in Gabon, but their political inclinations were different. Mba led the Gabon Democratic Bloc; Aubame led the Gabonese branch of the Party of African Reunion. The latter actively sought the formation of federal, supranational groupings in Africa, whereas the former was strongly opposed to such associations. Underlying the attitude of Mba was the belief that Gabon, having the richest economic potential in the region, would end up supporting its poorer neighbors in any federal system.

In a referendum on 28 September 1958, the territory of Gabon voted to become an autonomous republic within the French Community. On 19 February 1959, a constitution was adopted, and a provisional government headed by Mba became the first official government of Gabon. Independence was formally proclaimed on 17 August 1960.

On 12 February 1961, Mba was elected president of the republic, heading a government of national union in which Aubame served as foreign minister. Friction continued between Mba and Aubame, however, and after several years of political maneuvering, Aubame led a successful coup d'état on 18 February 1964. Mba was reinstated on the very next day through French military intervention, as provided for by a treaty signed between the Mba government and the French in 1960.

Mba created the post of vice president in February 1967, and at his death on 28 November of that year, power was transferred peacefully to his vice president, Albert-Bernard Bongo. On 12 March 1968, Bongo announced the formal institution of a one-party system and the creation of the Gabon Democratic Party (PDG) as the country's sole legal political organization. He was reelected without opposition in 1973, 1979, and 1986. (It was announced in 1973 that Bongo had taken the name of Omar and converted to Islam.)

During the 1970s and early to mid-1980s, the exploitation of Gabon's valuable natural resources progressed rapidly, and in 1975, the country became a full member of OPEC. In 1986, depressed oil prices caused a sharp decline in oil earnings, resulting in severe austerity measures in 1986 and 1987.

These austerities in the face of Bongo's ostentations led to internal pressures for reform in the late 1980s. In 1989, Bongo began talks with some elements of the underground Movement for National Recovery (MORENA). This divided MORENA, but it failed to stem the emergence of new movements calling for the establishment of multiparty democracy.

In March–April 1990, Gabon convened a national political conference to discuss changes to the political system. The PDG and 74 other organizations attended, essentially dividing into two loose coalitions, the ruling PDG and its allies, and the United Front of Opposition Associations and Parties. The conference approved sweeping reforms, including the creation of a national senate, decentralization of the budgetary process, and freedom of assembly and press. However, the killing of an opposition leader on 23 May 1990 led to riots in Port-Gentil and Libreville, which required France to send troops to protect its expatriates and corporate property.

Multiparty legislative elections were held in September– October 1990, but they were filled with violence and suspected fraud. Opposition parties had not yet been declared formally legal. In January 1991, the Assembly passed by unanimous vote a law legalizing opposition parties. Throughout 1991 and 1992, there was endemic unrest, government clamp-downs, and economic disruption. Still, the PDG reaffirmed its commitment to multiparty democracy. On 5 December 1993, multiparty presidential elections confirmed Bongo, who ran as an independent against Father Paul Mba Abessole, as president with 51% of the vote. Opposition parties protested the result and forced a postponement of the 26 December 1993 legislative elections. International observers complained of widespread procedural irregularities but found no evidence of deliberate fraud. Independent observers, however, have reported a governmental policy of limitations on freedoms of speech, press, association and assembly, and the harassment of its critics.

Paul Mba Abessole, angry at the outcome, announced the formation of a rival government dedicated to new presidential elections, the restoration of peace, and the maintenance of national unity. The rival administration was supported by a High Council of the Republic, later called the High Council of Resistance, composed mostly of defeated presidential candidates.

Bongo was harshly critical of the opposition government and appealed to its members to join his government in a show of unity. In January 1994, Gabon's Constitutional Court ruled that the elections had been fair. Civil unrest continued, however, as the country suffered from the devaluation of the CFA franc. Trade union demands for higher salaries led Bongo to impose a curfew, ostensibly to quell labor unrest but he also ordered security forces to destroy a radio transmitter operated by his political opponents and to attack a leading opposition figure's private house. The labor unrest lasted less than a week, but resulted in between 9 and 68 deaths, depending on whose figures are to be believed.

Negotiations on the creation of a unified government were held throughout 1994 to little effect. In September, the Organization for African Unity sponsored multilateral talks in Paris, which finally resulted in a tentative power-sharing agreement among Bongo's PDG and the main opposition parties. Legislative elections, which had been postponed in December 1993, were rescheduled for 1995 and Bongo agreed to bring opposition party members into a new government. The agreement essentially fell apart, however, when Bongo gave only 6 of 27 ministries to opposition members. At least two opposition members refused to participate in the government. By mid-1995, Bongo formed a functioning government with a modicum of opposition representation.

In July 1996, the Gabonese overwhelmingly approved a new constitution, calling for, among other things, a 91-member Senate. Legislative elections were held in December of that year, fully three years after they were scheduled. The PDG won a substantial majority (85 of 120 seats). When elections for the Senate were held in January and February 1997, the PDG again emerged as the dominant party, winning 54 of the 91 seats.

In 2002 Bongo announced his decision to set aside 10% of the country to protect its ecosystems as part of the Congo Basin Initiative. He also closed three newspapers after they reported allegations of corruption in his government. His appointment in January 2003 of Paul Mba Abessole to the post of third deputy prime minister suggested a pragmatic attempt to co-opt the opposition. Bongo was expected to run for another term in 2005.

hellooo thanks for the info! this helped for what i was doing cuse i was doin some research on Gabon. Thanks!
2
sakura

omg i got an A+ cuz of this info thank you! i told my friends about this website and they also got an A thank you so much