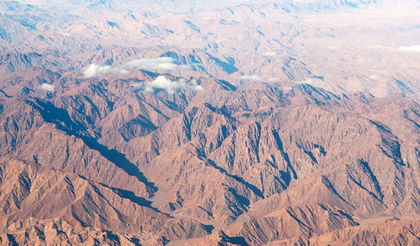 The bulk of the country is covered by the Sahara, which north of Aswan is usually called the Libyan Desert. East of the Nile, the Arabian Desert extends to the Red Sea. The Western Desert consists of low-lying sand dunes and many depressions. Kharijah, Siwah, Farafirah, Bahariyah, and other large oases dot the landscape; another lowland, the Qattara Depression, is an inhospitable region of highly saline lakes and soils covering about 23,000 sq km (8,900 sq mi). The outstanding topographic feature is the Nile River, on which human existence depends, for its annual floods provide the water necessary for agriculture. Before the completion of the Aswan High Dam in 1970, the floods, lasting generally from August to December, caused the river level to rise about 5 m (16 ft). Now, however, floodwaters can be stored, making it possible to provide year-round irrigation and to reclaim about 1 million feddans (about 1.04 million acres) of land. Damming the Nile resulted in the creation of Lake Nasser, a reservoir 292 km (181 mi) long and 9–18 km (6–11 mi) wide.

This is very helpful thanx but i just need a little more i would greatly apreceate it if u would do that for me.
2
odessa

hello my name is odessa clark i live in caney ks. im 15 years old and im home schooled im in the 9th grade. I like it alot!!!!!!, and one of my ?'s was describe the topograparhy in my vook ( around the world in 180 days) grate book im learning alot, and i like this web site it helped me figure out my ? thank you.

Thank you so much! This article really helped me to answer many questions for the book, Around the World in 180 days, which is a Geography/cultture/ history book for Homeschoolers.
4
ivan

thanks because of this article i got a A on my project same for my half semester grade :)
5
Bob Jonsen

thanks so much this website was so awesome!!! this is sooo cool i hpe you all like it!
6
ej

good info (" it helped me whoth my sceince paper that i got an a on woopy!)
7
Megan

This page was really helpful in my research for a school curriculum Around the World in 180 days. i would like more info on Upper and Lower Egypt and the difference between the two. Three cheers for all home-schoolers!
8
Jenny

i love this page! it was really helpful with my assignments in a homeschooling curriculum for social studies: Around the World in 180 days. thanx so much!
9
Jared Voeller

Hey!
I really appreciated the info... very helpful, although i need some info about upper and lower egypt any ideas?!?! also I am going through this book called: Around The World In 180 Days.... I thought since there are so many other people going through this book we should start a thread... questions, answers...etc anyways if anybody starts it please it me know... my email is jaredvoeller@gmail.com
Thanks again!
Jared
10
Schuyler

I'm using 'Around the World in 180 Days' as one of my curriculum for Home school. This page helped tremendously! Thanks so much!
11
Bianca

Thank for the information it really helped me on my assessment! thankz! =)
12
Kennedie Brown

I have the same book and this helped me a lot. I am Kennedie, Homeschooled in the ninth grade and The "Around the world in 80 days" workbook is rock hard. Thanks for your help!
13
Becca

Thanks so much for your help!! I love that so many people are doing the same book I am and are homeschoolerd! That is so awesome! :D THANKS!
14
Sara

duuude I did not realize so many people used this book! I do too, thanks for the help!
15
Caroline

Yeah, it's kinda scary how everybody is doing the same curriculum. But this is a good article for the book. I'm doing it as a sophomore, so it's not dreadfully hard, esp. after 3 years of world history, but it really helped with the geography side of things.
16
Alexa

This is really helpful! i used it for my school project and it is like, AWESOME!
17
Dakota

Becca - "Thanks so much for your help!! I love that so many people are doing the same book I am and are homeschoolerd! That is so awesome! :D THANKS!" Same here.

This seems to be a common book amung us homeshcool types.
18
aliciya

Haha, wow! I'm using that book too and this website is awesome! Thanx so much :D
20
melanie

this page was very helpful for me... I'm also a homeschooler using the Around the World in 180 days curriculum for school
21
Alyssa

Extremely helpful!! I am using the curriculum Around The World in 180 Days and this helped me achieve an A. :D
22
Hamilon

OMG! If it weren't for this, I would have failed my project. Good website.
24
abby

THANK YOU so much! This is information is extremely helpful! Without it, I would not have been able to finish my essay on Egypt.

thanks so much dude this artical was narley helped me shoot my grade up. very helpful website totaly recommend