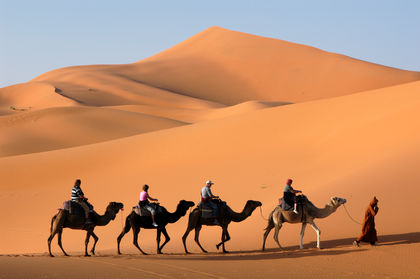 Situated at the northeastern corner of Africa, the Arab Republic of Egypt has an area of 1,001,450 sq km (386,662 sq mi), extending 1,572 km (997 mi) SE – NW and 1,196 km (743 mi) NE – SW . However, the cultivated and settled area (Nile Valley, Delta, and oases) constitutes only about 3.5% of Egypt's land area; the Libyan and Western deserts occupy about 75% of the total. Comparatively, the area occupied by Egypt is slightly more than three times the size of the state of New Mexico. Beyond the Suez Canal in the east, the Sinai Peninsula overlaps into Asia; the Sinai was occupied by Israeli forces from 1967 to 1982.

its good information about egypt, but as a student i hope some more information must be given with pictures.
2
Monica

Do you have any information on Ancient Egypt?
Other than that this is a fantastic site. Short, sweet, to-the-point, but informative and detailed. Great job!
3
leslie m. gonzalez

this information is awsome i'm diong a research on egypt for a class project in language arts pre-ap (g.t)i'm in lamar middle school 6th grader i used to be in cigarros middle school puro bulldogs! (hi every one in cigarroa middle school !)
4
shweta

this is what i was needing what other sites dint have. it is wonderful. i needed it for my class project
5
leah

This is exactly what I need. This is a fantastic site! Thanks.
6
tealisha

this is the best information ive seen about the area of egypt i love this website and any time i need information i will come to this site i will try to tell every one i know and even if i dont P.S dont stop giving out great information.
7
jude

this is what i needed for my geography home work brillant!
8
maemae

THIS IS A GREAT WAY TO HELP YOU IN SOCIAL STUDIES OR HISTORYCLASS FOR YOUR ESSAY! IT HELPED ME AND GOT ME AN A+
10
jacky

This is great. I'm writing a report on Egypt and I needed info. The other sites did not give this info.
12
Jordana

to the point, detailed, and very informative. this is what i was looking for, thanks!
14
kadija

This artical has so much awesome nfo. Got me an A+
17
daniella

THE INFORMATION WHICH IS THERE ON YOUR WEBSITE IS SO KNOWLEDGEABLE THAT I KNOW ALL ABOUT EGYPT,SPHINX ETC
19
jade

this is just what I needed. it is helpful for my 7th grade project
21
Mia

This is not what was looking for, but WONERFULL information! in 6th grade at mms, this helped a little.
22
LEXI

THIS INFO IS GREAT NEEDED THIS FOR A CLASS PROJECT!!!
23
tanya

I GOT GREAT INFORMATION FOR MY HISTORY PROJECT, IT IS GOOD
24
brandi

I got awesome information on the site for my project,it's awesome
25
Jess

Hi im in 7th grade, Red Wood Park Priamary school, and i have a topic assignment on Ancient Egypt and Ancient China. I need to find oit how big egypt is, The capital (REBEL AGAINST THE CAPITOL!! ~The hunger games) and the three maim cities, the main river, name important lakes AND find what sea is on egypts coast.
this website did not explain all of this info but its nevertheless good!
Btw imma harry potter fan
(also if theres any spelling mistakes it's becuase I'm on my kindle ;D
26
jessie

WOw this is so cool ive been surfing the internet the last couple of days, modern technology is so cool, ive been so busy building my ark and rounding up the animals, this pic of the camels rly helps!!!
28
north putnam student