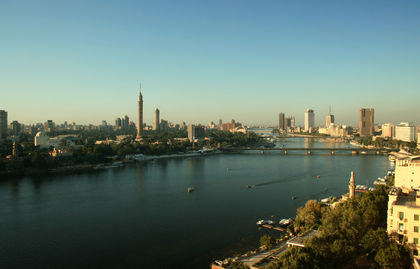 Egypt at the time of the 1952 revolution was much further advanced industrially than any other Arab country or indeed any country in Africa except South Africa. Under the socialist Nasser administration, the government coordinated industrial expansion and the establishment of an industrial base. As a result, bureaucracy and a dependence on political directives from the government became common to Egyptian industry. Since the early 1990s the government has promoted privatization as a way to eventually increase industrial output.

The petroleum industry accounts for 40% of export earnings, but there are concerns that by 2005–10 Egypt will have to import oil, as oil fields mature and domestic demand increases. Egypt's proven oil reserves in 1999 were estimated at 3.5 billion barrels. In 2002, the country had 9 oil refineries, and was producing 631,616 barrels per day of crude oil, down from 748,000 barrels per day in 2000. Egypt is encouraging oil exploration, but natural gas is becoming the focus of the country's oil and gas industries. In 2002, two multi-billion dollar liquefied natural gas projects designed to export gas to Europe were underway. A large natural gas field off the Mediterranean coast of the Egyptian city Damietta was discovered in 2002, with the field's reserves estimated at 530–1,060 billion cubic feet. Natural gas reserves in the country are estimated at 55 trillion cubic feet (Tcf).

Egypt's industrial sector has undergone major reforms since World Bank adjustment programs went into effect during 1991, privatizing and restructuring state owned enterprises. Some of the companies in important non-oil industries are technically in the private sector, but control still remains with the government.

I was doing a report on Egypt, and this page really helped for the industry section.
2
DarcSilver

wow this helped alot i had a big project due
thank u
----
same here, quick, fast and easy, i had to do a huge geography project in one night!
4
miley

this help alot thank you so much

I was doing a report on Egypt and this page really helped me. Thank you so much.

hey.thx for the data .it was so helpful ,cuz my teacher would kill me if i hadnt get them
7
SydneySmith

This helpped me alittle, but not as much info as i needed./:
8
Yalitza De Los Santos

this page is super helpful!!!i had to do a huge project in one night because i was procrastinating alot so this was super helpful in the industry section!!!
9
Ele

HEY! THANKS A LOT OF THIS KIND OF REPORT THIS WOULD BE HELPFUL FOR MY REPORT ALSO.
11
courtney

People on this page don know how to spell.. and this paper was not helpfull and i have report due tomarow so dont stay on this site because it will not help you !
12
surinder singh

i was having an exam on IBM and this article really helped me a lot. thanks to the publisher.
13
shayla

This page is great.Saved me a lot of looking up since I have a project on Egypt due next friday.
15
miranda

this is not a good thing to look up! :( ... you people should take this off
16
Chris from Glen Rock

I had a Report on Egypt and I needed industrial and agricultural products, and this helped a lot.
17
Ronald Rodriguez

I am going to send a report to JRank that he has proved helpful to me!
This encyclopedia is proved useful to me. MY entire project needed only 5 mins. to be completed! (only the data part)
18
katarina stevenson

this was useful to my report, but i was looking more for factor endowments in the oil refinery
19
erin fassio

Wow i have a project on Egypt.This really helps me learn about inport export etc.Thank u for your helpful WEBSITE
22
raven

I don't have any report for this to be helpful.. actually I am Egyptian and I this is the first time I know these things about my country.. thanks
24
Mark

I don't have any report for this to be helpful.. actually I am Egyptian and I this is the first time I know these things about my country.. thanks
25
sai

I am doing my Geography homework and this page is a god send I have spent ages trying to find a good website to copy down information and it has helped 2 pages more!
27
Amanda

thanks, it helped me do my social studies project a lot , thanks again!
28
aliyu

THANK YOU ALOT.thxs a hole lot it helped thank you for every ting this is cool thxs
30
Yoi

This helped me on my report. Thanks so much! Without it I would have failed.
32
bob ma'dylan

I really found this page useful for finding a boring thing to do thanks :)
33
jozi â˜…â˜†