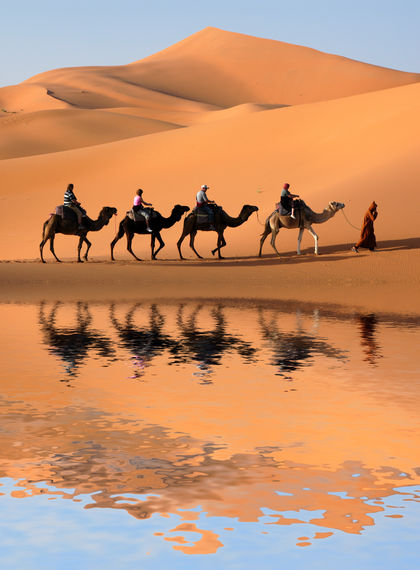 Egypt's environmental problems stem from its aridity, extremely uneven population distribution, shortage of arable land, and pollution. Soil fertility has declined because of overcultivation and agricultural land has been lost to urbanization and desert winds. In addition, the nation's beaches, coral reefs, and wildlife habitats are threatened by oil pollution. Heavy use of pesticides, inadequate sewage disposal, and uncontrolled industrial effluents have created major water pollution problems. The expanded irrigation of desert areas after completion of the Aswan High Dam in 1970 has increased soil salinity and aided the spread of waterborne diseases. As of 1994, 28% of Egypt's soils had been damaged by increased salinity. Egypt's cities produce 3.0 million tons of solid waste per year. Only 79% of the population living in rural areas have adequate sanitation facilities. Half of Cairo's raw sewage is carried to the sea in open sewers and some 100 of 120 towns do not have sewer systems at all. Even the existing sewers are decrepit; in December 1982, the bursting of a sewer main flooded a large area of Cairo with untreated waste and temporarily curtailed tap water for about 2 million people. To improve sewage disposal, the government earmarked E £2.9 billion under the 1983–87 five-year plan for sewage projects, allocating E £2 billion to Cairo alone. The nation has 1.8 cu km of renewable water resources, with 86% used for farming purposes. With recent improvements, about 97% percent of the population have access to pure water. The National Committee for Environment, within the Office of the Prime Minister, is the principal agency with environmental responsibilities.

Centuries of human habitation in the Nile Valley over the centuries has decimated Egypt's wildlife in that region. Altogether, less than 1% of Egypt's total land area is protected. The hunting of any bird has been prohibited by law. In 2000, 15 of Egypt's 98 mammal species, 11 birds, 6 types of reptiles and 1 type of amphibian were endangered. About 59 of the nation's 2,076 plant species were threatened with extinction. Endangered species include the Sinai leopard, northern bald ibis, and green sea turtle. The Bubal hartebeest, Egyptian barbary sheep, and Sahara oryx are extinct.

I liked this article and please write more because my project is based on this info. Please contact me for more info.
Ditty :)
5
mr. environment

please tell me if anyone has any more info. i think it's shocking that Egypt's environment is so bad.
6
Zawesome

Hi. I need to know more about Egypt's problems of sewage waste management and what's the government strategic about them. If you can send me an e-mail about it ASAP, that would be great. Thank You!
7
Tasneem

What is our government doing, just sitting there?? We are turning earth to an unlivable place. If we destroy earth, where do we go?
8
basheen

this really didnt help me at all. yall need more facts about this subject. Thank u
10
Derry

thank you this info is great and it is one of the only websites i can research on.
11
knyia

this is a good website for people to know what to put on a essay.
12
alyssa

this helped me with my project in school. i got a really good grade