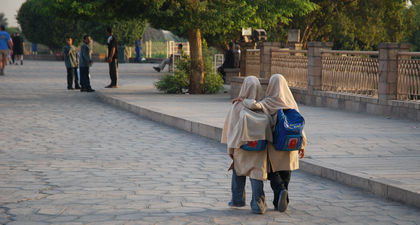 The Education Act of 1953 provided free and compulsory education for all children between the ages of 6 and 12. Preparatory schools offer three-year courses leading to a basic-education completion certificate, which is the entrance requirement for three-year courses in secondary schools. The curriculum was updated in 1995 and includes a greater emphasis on vocational training, as well as on physics and foreign languages. The general secondary education certificate entitles the holder to enter a university. A majority of primary-school graduates continue their education in preparatory, secondary, or vocational schools.

A decree of 23 July 1962 provided free tuition at all Egyptian universities. The traditional center for religious education in the Muslim world is Al-Azhar in Cairo, which in 1983 celebrated 1,000 years of teaching as the oldest continuously operating school in the world. Al-Azhar offers instruction in three faculties and 14 affiliated institutes and maintains its own primary and secondary schools. There are a total of 13 universities, and numerous institutes of higher learning. Egypt's universities had a total of 850,051 students in 1996. Universities and equivalent institutions had a faculty of 38,828 in 1994.

There is also the American University in Cairo, which offers a wide range of undergraduate and graduate courses, as well as an American school in Cairo and one in Alexandria. The American Research Center in Cairo is supported by US universities and museums. It was established in 1948 to encourage the exchange of archaeologists and other researchers in almost all fields of interest.

Adult education, under the Ministry of Education, is increasingly important. Since 1993 the government conducted a campaign against illiteracy. Business firms are required to combat illiteracy among their employees. Recent university graduates are being hired to lead literacy classes, and armed forces recruits are also expected to teach. In addition, the government has set up 3,000 one-class schools to teach a nontraditional study plan. These schools are aimed at girls who are unlikely to attend formal schooling, and as a result, are likely to remain illiterate. The schools provide vocational training and lessons on income generating businesses, in addition to the more traditional classes in Arabic, religion, sciences and arithmetic. As of 1999, public expenditure on education was estimated at 4.7% of GDP.

thanks so much this info helped me on my project alot!
2
Emma

thnx that helped me a lot .. in my project .. but i need more information in that subject ...
6
dorthyann