Cameroon relies heavily on customs duties and direct taxes as sources of government revenue. Most of Cameroon's oil revenues do not appear in the national budget and are maintained in secret accounts abroad. The year 2000 budget was increased from $112 million to almost $2.2 billion in order to repay public debt, subsidize national education, public health, maintain infrastructure, and fund the police and armed forces. Also in 2000, the government of Cameroon was commended by the IMF for sound macroeconomic policies and thereby qualified for $2 billion in debt relief under the Heavily Indebted Poor Countries (HIPC) initiative.

The US Central Intelligence Agency (CIA) estimates that in 2000/2001 Cameroon's central government took in revenues of approximately $2.2 billion and had expenditures of $2.1 billion. Overall, the government registered a surplus of approximately $100 million. External debt totaled $10.9 billion. 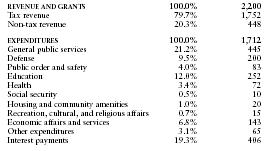 Good afternoon. Please can I have 2014 stats? Thank you.