About half of the government's revenues in 1998 came from the diamond industry with another 20% from returns on foreign reserves. Tourism is becoming increasingly important, accounting for 12% of GDP in 2000. Government spending in 2001 accounted for almost 20% of GDP.

The US Central Intelligence Agency (CIA) estimates that in 2001/2002 Botswana's central government took in revenues of approximately $2.3 billion and had expenditures of $2.4 billion. Overall, the government registered a deficit of approximately $100 million. External debt totaled $325 million. 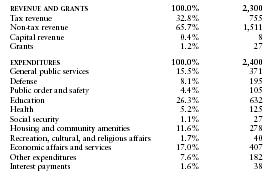 HOW DOES BOTSWANA'S TREASURIES HANDLES THE EFEECTS OF BUSINESS CYCLE AND ALSO REDUCING THE INCOME INEQUALITIES BETWEEN GENDER AND AGE GROUPS? ANY GOVERNMENT POLICY AIMED AT DOING SO?