Oil exports produced substantial trade surpluses during the late 1970s and early 1980s. Despite this positive cash flow, Angola in 1979 began to request lines of credit in order to finance its reconstruction projects. By 1991 the government's economic policies encouraged neither private investment nor non-oil exports. Furthermore, poor monetary policy created price distortions which exacerbated a trade deficit and rapidly diminished agricultural exports. The results of the end of the 27-year-old civil war in 2002 on trade had yet to be assessed as of 2003.

The US Central Intelligence Agency (CIA) reports that in 2001 the purchasing power parity of Angola's exports was $7 billion while imports totaled $2.7 billion resulting in a trade surplus of $4.3 billion.

The International Monetary Fund (IMF) reports that in 2000 Angola had exports of goods totaling $7.92 billion and imports totaling $3.04 billion. The services credit totaled $267 million and debit $2.70 billion. The following table summarizes Angola's balance of payments as reported by the IMF for 2000 in millions of US dollars. 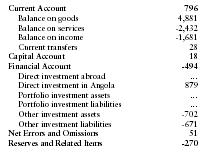 why was Angolan exchange rate appreciated highly on december,2002 and on june 2005