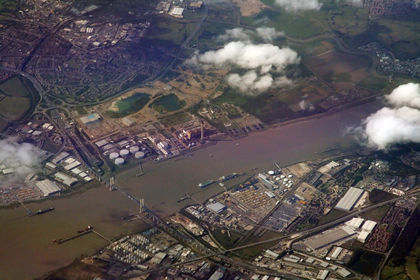 British industry is a combination of publicly-and privately-owned companies. Since the 1980s, successive governments have worked to privatize most state-owned industries, but concerns over unemployment and public opposition to further privatization has slowed future plans. Examples of industries that remain owned by the government include railways, ship building, and some steel companies. Major segments of British industry include energy, mining, manufacturing, and construction.

One of the strongest components of the British economy is the energy sector. The United Kingdom is a net exporter of energy. In addition to oil, the kingdom has abundant reserves of natural gas, coal, and atomic power. Most of the kingdom's energy resources are concentrated in the North Sea. Currently there are more than 100 active oil and natural gas fields. In addition to the British companies operating in the area, there are a number of international firms, including Texaco, Philips Petroleum, and Chevron. The main energy resource is oil. The king-dom's proven reserves of oil exceed 5 billion barrels. In 1999, oil production reached it highest level at an average of 2.95 million barrels per day at 15 major oil refineries. Continued international demand for oil will lead companies to maintain these high levels of output. One distinguishing characteristic of the British energy industry has been consolidation. Many medium- and small-sized companies have merged or been bought out. The natural gas industry has been marked by increasing liberalization following the 1986 privatization of the state- monopoly British Gas. This was followed by the 1994 privatization of the nation's coal industry. The coal sector has undergone a dramatic decline. Coal production fell from 119 million short tons in 1986 to 46 million short tons in 1999.

The mining of minerals has declined over the past thirty years as the stocks of various minerals have been depleted. However, because British companies have substantial refining capabilities, many have switched to the processing of imported minerals. The main minerals still being mined are lead and tin. There is also significant production of refined metals such as aluminum and steel. The United Kingdom has substantial production of minerals used for construction. These include clay, kaolin, and gypsum. Britain is a major cement producer. About 75 percent of the market is controlled by 2 companies, Blue Circle Cement and Castle Cement. Blue Circle also controls about 25 percent of the Canadian market. British Steel is Europe's largest steel producer with revenues of US$12 billion. In the United Kingdom, British Steel produces about 13 million metric tons of steel per year. However, competition from foreign companies has led to plans by the manufacturer for significant reductions in the number of workers over the next 5 years.