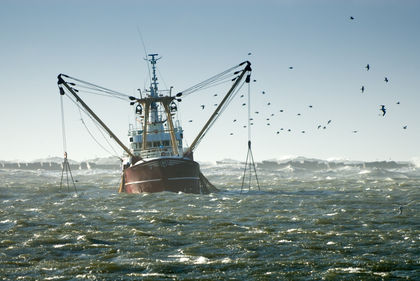 Almost 160 million people live within a 300-mile radius of Rotterdam. This includes more than half of the population of the EU. As a result, the Netherlands is perfectly positioned as a gateway for goods being imported into the EU. In addition, Dutch goods are easily exported throughout the region. In all, 80 percent of Dutch exports go to other nations within the EU and 70 percent of goods imported into the Netherlands come from the EU. Asia accounts for only 17 percent of the nation's exports and 7 percent of its imports. The largest individual destination for Dutch goods is Germany at 27 percent, followed by Belgium-Luxembourg at 13 percent, France at 11 percent, the United Kingdom at 10 percent, and Italy at 6 percent. Imports are divided between Germany with 20 percent of the total, Belgium-Luxembourg with 11 percent, the United Kingdom with 10 percent, the United States with 9 percent, and France with 7 percent. The Dutch are the ninth-largest trading partner with the United States and the third-largest in Europe. The United States has its largest trade surplus with the Netherlands, averaging US$10 billion per year.

The Netherlands leads its EU partners in issues such as trade liberalization and the privatization of key industries such as telecommunications and transportation. Thus, it is in a good position to continue its trade surplus. In 1999, its trade surplus in both goods and services amounted to US$18 billion. This represented a 6 percent growth rate over the previous year and accounted for 6 percent of the kingdom's GDP. Dutch exports are concentrated in products that tend to do well even during periods of recession. These exports include food and agricultural products and energy resources.

In 1998, the Dutch exported US$169 billion worth of goods and services and imported US$152 billion. This represented a 5 percent increase in exports over the previous year and continued a trend of positive growth in exports which extends back into the 1980s. Services were the fastest growing exports and increased 6.9 percent in 1998, while the export of manufactured goods increased by 3 percent.

Because of the importance of trade and the impact of foreign sales on the Dutch economy, the government is a staunch supporter of global free trade. The Netherlands has worked closely with the United States to open markets around the world and reduce tariffs and other impediments to international commerce. The country works through international organizations such as the World Trade Organization (WTO) and the International Monetary Fund (IMF).

The main international organization which has aided the Dutch economy has been the European Community, now known as the EU. Before the formation of this regional organization, about 40 percent of Dutch trade exports went to the nations of Europe. However, exports to Europe now account for about 80 percent of Dutch exports. The Netherlands was one of the founding members of the organization and has consistently supported increased economic integration among its members, including the establishment of a common currency, the euro. Because the use of the euro will reduce transaction costs between countries by eliminating differences in currency exchange rates , the implementation of the euro is expected to add US$3.5 billion in new business to the Dutch economy. It is also expected to increase foreign investment in the Netherlands by US$2.5 billion.

Since the end of the Cold War and the opening of Central and Eastern Europe to free-market capitalism, the Dutch have aggressively sought to gain access to the emerging markets in countries such as Poland, Hungary, and the Czech Republic. They have also supported international efforts to reform the economies in the region in order to facilitate increased trade, and they support EU expansion to bring countries in the area into the trade organization.

The geographic location of the Netherlands and its highly skilled and productive workforce has attracted numerous international companies. By 2000, there were 6,400 foreign businesses with operations in the kingdom. These companies employed 357,000 Dutch workers. In order to encourage new investment and attract foreign companies, the Dutch government established the Foreign Investment Agency. This agency has overseen the implementation of 85 different projects with a combined value of US$531 million. These projects also resulted in 5,000 new jobs. The Dutch government offers grants of up to 20 percent of the start-up costs of new companies. The bulk of foreign investment in the Netherlands is from the United States (in 2000 the U.S. accounted for 80 percent of new investment). Total American investment in the kingdom is US$106 billion. The majority of U.S. investments were in financial services and real estate. The Netherlands is the third largest recipient of U.S. investment in the world.

Good work! Thanks for all the help, this site is awesome!