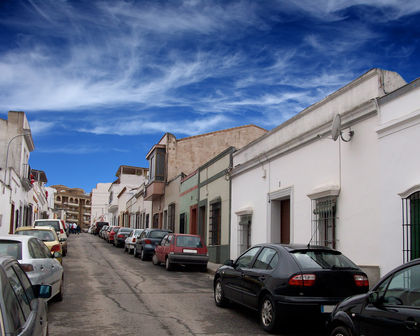 and a small middle class. Industrialization came relatively late to Spain and was concentrated in few areas. The social structure was polarized between a small upper class, consisting fundamentally of large landowners (latifundia) and a large rural proletariat (jornaleros). In the South agricultural day laborers were employed on a seasonal basis by the large landowners; in the North ownership was more evenly distributed and there were many small family farms. In 1957 1 percent of the population belonged to the upper class, 38.8 percent to the middle class, and 60.2 percent to the lower class.

By 1988 the figures were 4.8 percent, 59.4 percent, and 32.9 percent, respectively. The growth of the middle class had begun by 1970. The numbers of agricultural workers fell, eroding the power of the large landowners and the rural bourgeoisie and diminishing the problem of the rural workers' social conditions. Today, professional, technical, managerial, and administrative groups have increased significantly as levels of education and qualifications have improved. The service sector has grown while manufacturing and construction declined. The urbanization, modernization, and economic development of the country can be seen in the social structure of the 1990s.

Earnings differential have increased in recent years. In 1981 a blue-collar worker in manufacturing or service earned 67.7 percent of a white-collar worker's salary in

The standards of living have risen significantly due to the improvement of the education, health, and other social welfare programs over the last 25 years. Education is compulsory until the age of 16, and university education is no longer the privilege of a small elite; by 1990 almost half the university students had parents with only elementary education. Twenty-nine of the 33 universities are public and access is merit-based. In cases where the regional government has responsibility over education, regional languages such as Catalan and Basque are obligatory. There is a free, universal health-care service for all citizens. There are both contributory and non-contributory unemployment benefits and pension provisions. It should be noted, though, that in the drive to decrease public spending, it is harder to qualify for unemployment benefits (for example, those holding temporary contracts are not eligible for unemployment payments). The amount given to those receiving non-contributory pensions (such as what is called the SOVI) received almost 10 percent less in real terms than 5 years ago. Vulnerable groups—the disabled, elderly, abandoned children, single mothers, battered wives, families without income, and the homeless—receive special attention through different state-sponsored funding programs. Nevertheless, these services were only properly organized in the 1980s and the 1990s and Spain still spends a smaller share of the GDP on them than the EU average. Interestingly, Spain has one of the highest life expectancies in the world. While some have argued that this is a benefit of the social welfare system that attempts to universally cover all, others argue that long life expectancy is a consequence of the generally healthier Mediterranean diet, characterized by olive oil, fruits, vegetables, and legumes.

Despite the apparent strength of the policies of redistribution (such as education, health, and other social welfare programs), regional differences in wealth persist. The 3 richest autonomous communities are Madrid, Barcelona, and the Basque Country, which are representative of the financial and industrial strongholds of the country. The poorer regions in the country remain in the North and South, where the larger part of the economy remains agriculturally-based. These include Galicia, Castilla la Mancha, and Extremadura.