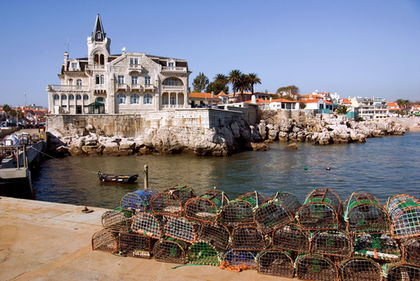 Although the country's economy is progressively shifting its weight to the services sector, manufacturing retains significant importance in Portugal, employing (with construction and mining) more than one-third of the labor force. Major traditional manufactures include processed food, textiles, metals, machinery and ship repair, chemicals, wood (particularly cork), glass and pottery items, refined petroleum, and building materials. Annual production in the late 1980s included about 27,400 metric tons of processed sardines, 285,900 metric tons of refined sugar, 1.3 million metric tons of chemical fertilizers, and 386,900 metric tons of steel products. The products of Portuguese cottage industries, such as lace, pottery, and tiles, are world famous, and the shoe industry also performs particularly well. Some new sectors, such as automobiles and automobile components, electronics, and plastics, have also become increasingly important over the 1990s. The prosperity of the manufacturing sector generally improved during the 1990s, with output expanding by a yearly average of 3.1 percent. This was due in part to the presence of a new generation of Portuguese entrepreneurs and the appearance of major foreign investors. Industrial policy in the 1990s focused on attracting foreign capital, mostly by way of privatization, but also by offering state and EU subsidies and assistance to investors. The government intends to further privatize several manufacturing facilities, notably in power generation, chemicals, and construction materials (cement). Not all foreign investments have been successful, however, and the government has been criticized for not properly securing guarantees for the future performance of many of them. Between 1995 and 2000, for example, 2 automobile manufacturers, Ford and the French company Renault, have terminated production in Portugal.

A considerable number of Portugal's more traditional manufacturing businesses are still run by the most powerful families. Nonetheless, a new generation of family management has been successful in meeting the challenges of the European single market through technological innovations, developing export markets, and making use of the country's low wage structure. However, many of these industries face increasingly tough competition from the Asian economies, where wage levels are even lower and where currency devaluations in the 1990s have increased their competitive edge. Many firms have been unable to adapt to these new market realities, resulting in a decline in the production of textiles, clothing, and footwear between 1995 and 2000. Difficult economic conditions are expected to continue until 2005, as companies shift their output to more value-added products. Raising productivity is an important priority for Portuguese manufacturing, but its record in research and development is weak. In 1997, it spent only 0.63 percent of its GDP on research and development, less than one-third of the average amount of EU nations.

Nevertheless, the 1990s saw positive developments in the newer manufacturing sectors as well. A joint venture with Ford and Germany's Volkswagen (VW), Auto-Europa, was launched in April 1995 with the purpose of building multi-purpose passenger cars for export. At the time, it was Portugal's largest manufacturing operation. This US$2.6 billion investment package received the highest level ever of union subsidies in the EU at nearly US$1 billion. From the beginning, however, company executives admitted that production and employment would not meet forecasts because of weaker than expected European demand for the vehicle being produced. Ford gradually pulled out and VW acquired full ownership of the venture. Despite these setbacks, this modern plant has had a very positive impact on the economy, producing nearly 130,000 cars per year. They are almost all produced for export, generating sales of US$2.3 billion and accounting for some 12 percent of the total worth of Portuguese exports (1997 est.). The plant employs 3,000 workers and has helped to create more than 5,000 other jobs. At its full capacity, it could add as much as 15 percent to the value of Portugal's total exports and 6 to 7 percent to its import bill. The AutoEuropa plant is situated in a new industrial park outside of Lisbon in Palmela, where many of its main suppliers are located as well. Taguspark, also located outside of Lisbon in the city of Oeiras, is a science and technology park built in 1992 that housed about 100 new technology companies in 2000.

It was great to read the article. I got ideas about the industry sector of Portugal. I am a banker from Bangladesh. I am currently living in Tavira. I think I will follow the rules of this country. The country is very well liked. If you give me a job, I would work for this country.
3
Noor Alam

Looking for a job of surveyor at topographical survey, sand feeling volume calculation ( land leveling). And layout planning. From Bangladesh. It will be great to find out something.