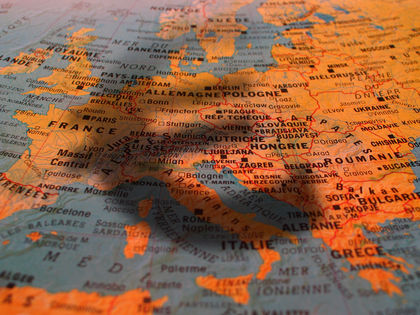 Italy's gross domestic product (GDP) of US$1.273 trillion makes it the sixth richest country in the world. In income per capita, it occupies 18th place. The country's economic success is a recent accomplishment. Italy was unified in 1861 after 3 wars of independence fought against various foreign rulers who dominated different parts of the country. The driving force behind Italy's unification was Victor Emmanuel II, the king of Piedmont and Sardinia, who waged wars against foreign rule in the name of Italian independence and territorial unity. Italy had long been carved up by foreign powers, but several self-ruling cities and kingdoms also existed. With the help of committed patriots, such as Giuseppe Mazzini and Giuseppe Garibaldi, Victor Emmanuel accomplished his aim to unify the country under his rule. Despite the enthusiasm of unification, economic conditions were poor. Italy had few industries, and most people lived off agriculture. Furthermore, the difference between the more advanced northern half of the country and the poorer south was evident. The pace of industrialization was slow, and industry could not provide jobs for new generations of workers. Because of the poor standard of living and lack of work, many Italians left the country to find a better life, particularly in the United States. The first wave of mass emigration to the United States took place before the turn of the 20th century, followed by a second wave after World War I (1914-18). During the period of Italy's fascist rule, which lasted from 1922 until 1943, and then following the end of World War II (1939-45), many Italians migrated to European countries such as the United Kingdom, Germany, and Belgium. Before the economic boom in the late 1950s, many Italians also migrated to Australia, South Africa, Switzerland, and Latin America.

The turning point in Italian economic history was the economic prosperity of the 1960s. At the time, private and state-owned enterprises took advantage of foreign assistance from the United States under the Marshall Plan and the launch of the European Economic Community (EEC) to restore the Italian economy. Despite skepticism about the European Common Market, Italy joined and profited from the progressive integration of Western European economies. By developing strong export-related industries, the industrial triangle of Milan-Genoa-Turin led the economic boom. Italian exports became attractive, and the growth of exports led to a strong internal demand for goods and services. Small and medium enterprises began establishing themselves and prospering in Northern Italy. These companies were the force behind economic growth as they exported machinery, engineering products, textiles, and clothing. Large private companies such as FIAT and state-owned companies such as ENI and ENEL also contributed to economic growth. Meanwhile, southern Italy remained impoverished, and its inhabitants migrated north in large numbers until the late 1970s.

In the following decades, Italy was able to consolidate its economic success, even though the economy was never again as strong as it had been in the 1960s. Comparatively, the Italian economy grew faster in the 1960s than any other European country, while around the world only the Japanese economy fared better. The 1970s and 1980s saw much more uneven development. Italy is heavily dependent on Algerian gas and Arab oil supplies, so it was hit hard by the oil crises of the 1970s. Despite this trouble, Italy's economy grew over 3 percent annually during the 1970s, though it began to slow at the end of the decade. The second oil crisis in 1979 and domestic political turmoil created high unemployment and high inflation . Strikes, demonstrations, flight of capital, and confrontations between the trade unions and businesses plagued the country. To steer the country away from this troubled period, political parties formed a Grand Alliance to find a solution that would satisfy most of the people. A national solidarity government was formed and managed to deal with the problem of stagflation (high inflation combined with high unemployment and stagnant consumer demand), reduce civil unrest, and lay the foundations for future growth. The country began to recover about 1983 and moved toward a new period of economic expansion. Strong economic performance allowed successive governments to make improvements in the welfare state that provides health care, education, pensions, infrastructure , and benefits.

Before the 1980s, Italy was a free market economy with a strong element of state control and state ownership. Many state-owned companies had operated efficiently and contributed to economic growth. By the mid-1980s, however, the state sector was beginning to create distortions in the economy. Many Italians employed by the state lived well above their means, accumulating debts and enjoying a free ride at the public expense. By the mid-1980s, appointments to the civil service and to the management of state-owned enterprises were handed out as political favors, leading to widespread corruption. The mismanagement of public resources drained the economy. Furthermore, the high costs of the welfare system put a strain on the country's finances, thanks to widespread corruption and waste in the health care, social security, transport, and education systems. The economic slump of the early 1990s highlighted the burden of the public debt and brought about radical measures to cut costs, privatize , and reduce the role of government in the economy.

The state began to withdraw from its role in the economy after a first round of privatization was carried out at the end of the 1980s. Large state-owned enterprises such as the motor car manufacturing company, Alfa-Romeo, were sold to private investors. The progressive disengagement of the state from the economy created more room for private investors. With the prospect of entrance into the European Monetary Union (EMU), Italy was forced to undertake massive reforms to lower inflation, reduce the deficit, and lower interest rates. By 1992 reforms accelerated as the state disengaged from the economic sphere. The radical changes brought success in tackling the high deficit through cuts to the welfare state and measures to limit waste. Inflation was brought under control by means of restrictive monetary policies , and the tax system was made more efficient. Because of the initiatives, Italy succeeded in qualifying to participate in the EMU.

By 1998 and 1999, Italy experienced sustained growth after many years of high taxes, budget cuts, and high unemployment. The relative importance of the Milan-Genoa-Turin industrial triangle declined, and small and mediumsized private enterprises in the northern part of the country became the chief participants in the new boom. Recovery from the economic recession of the early 1990s and acceptance into the EMU was due, in part, to the social partnership pact brokered by the government. Employers and labor united to put an end to confrontation and to adopt part-time contracts, flexible hours, and lower overtime rates. Even the public sector embraced these changes to improve its efficiency. Investments were made in technological development, salaries were frozen for months, and the workforce increased production in exchange for job security.

The Italian economy is now much more free-market oriented than at any previous time. Several sectors have been liberalized and state monopolies disbanded. Many state-owned enterprises have been privatized over the last 8 years, with 13 percent of these sold to national private investors and another 8 percent to foreign private investors. The remaining 79 percent were sold to the public via stock offerings. Over 500,000 workers were transferred from the public to the private sector between 1992 and 1998. Some of the largest companies to be privatized or already privatized included: AGIP, SNAM, and Italgas (in the energy sector); ILVA, Ansaldo, Nuovo Pignone, Dalmine, and Italimpianti (in the industrial sector); Credito Italiano, Banco di Roma, and Banca Commerciale (financial sector); Telecom Italia (communication sector); and Alitalia, Tirrenia, and SEA (transportation sector).

By 2000, Italy enjoyed a healthy economy characterized by slow growth. In fact, Italy had the slowest growing economy of the 11 founding members of the EMU. With the GDP growth of 1.4 percent in 1999, Italy lagged behind the 2.9 percent annual growth rate of other countries in the EMU. But growth increased in 2000, reaching an annual rate of 2.7 percent and may be expected to continue to improve in the coming years as the country continues to adjust to the new economic scenario created by the withdrawal of the state.

Despite the relatively healthy economy, high unemployment, underdevelopment in large areas of the south, and the large presence of an often criminal, informal economy continue to plague Italy. Most of the unemployed live in the south. Organized crime tries to recruit those people. Unemployment has always been a problem even in times of economic growth. In 2000 unemployment stood at 11.5 percent. Although unemployment is high, it may not be reflective of reality because of the number of people employed in the nation's informal sector. Living conditions in the south of Italy are difficult, the job market is tight, and emigration is still the preferred option of many young people. The government has made a serious attempt to address this problem by granting tax breaks to companies willing to set up business and hire workers in the south. CGIL, the largest Italian trade union, calculated that between October 1997 and April 2000 over 100,000 people found work in small or medium-sized enterprises in the south.

The government has toughened laws against businesses that fail to pay their taxes and who gravitate toward the informal economy. Companies that want to move from the informal economy and legalize receive help. The re-emergence of the companies entitles workers to social benefits and helps generate revenue for the state from taxes. Most of the new enterprises are active in the clothing, footwear, agricultural, and construction sectors. Although these businesses operate on a small scale, many hire a large number of workers. It is difficult to determine precise statistics because of the informal nature of the market.

It is incorrect to treat the whole of southern Italy as a homogenous area because there are substantial differences in economic and social development in different regions. For example, Abruzzo is more prosperous and developed than Calabria. Within the same southern region, production compares favorably with the more affluent north. Although social development and the standard of living is improving, overall indicators still point, however, to a significant gap between the north and the south.

Ironically, factories in the north suffer from a shortage of labor because of recent economic growth. Despite unemployment rates below 4 percent, southerners are reluctant to move to the north. Southern objections include the high cost of living in the north and the long hours accompanied by most of the manual job opportunities. Many people from the south with higher education hold out for better job prospects. Because of job vacancies, smaller companies in the north request more visas for eastern European and African workers.

Is there anymore information about the Economy leading to 2012?