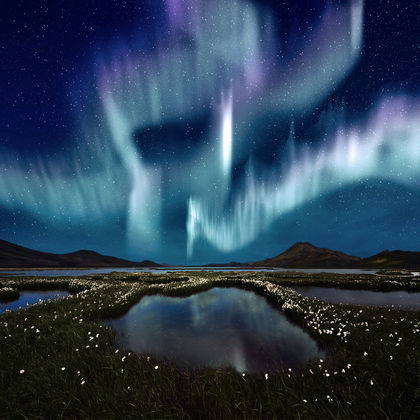 A small volcanic island located between the Greenland Sea and the North Atlantic Ocean in the Arctic, Iceland is the westernmost European country. Found between Greenland and Europe, just northwest of the United Kingdom, Iceland has an area of 103,000 square kilometers (39,768 square miles) of which 100,250 square kilometers (38,707 square miles) is land and 2,750 square kilometers (1,062 square miles) is water. Its coastline is 4,988 kilometers (3,099 miles) long. Iceland is about the size of the state of Kentucky. Its capital, Reykjavík, is located on the country's southwestern coast. The climate is moderated by the North Atlantic current. In Iceland winters are mild and windy and the summers are cool. Approximately four-fifths of the country is unpopulated and uninhabitable. Glaciers cover more of the land in Iceland than in all of Europe. In addition to glaciers, the island has lakes, mountains, a lava desert, lush green areas, and natural hot springs, making Iceland a spectacle of nature.

The majority of Icelanders live in a narrow coastal belt in the valleys and in the southwest corner of the country. The Icelandic government reports that 99 percent of the population live in urban areas and 60 percent of the people reside in the republic's capital, Reykjavík, or in suburban areas directly outside of the city.

Iceland has a relatively young and middle-aged population—65 percent are between 15 and 64 years, 23 percent less than 14 years, and 12 percent aged 65 and older. It enjoys one of the highest life expectancy rates in the world. Life expectancy at birth was estimated in 2000 at 79.39 years (male: 77.19 years, female: 81.77 years). Iceland also possesses one of the world's highest literacy rates at 99.9 percent (1997 est.). Literature and poetry are a passion of the people and its per capita publication of books and magazines is the highest in the world.

Icelanders descended from the Norwegians and the Celts (Scottish and Irish). The national language is Icelandic, which of all the Nordic languages is the closest to the Old Norse language. The Icelandic spoken in 2001 has changed little since the 12th century. About 91 percent of the people belong to the state church, the Evangelical Lutheran Church. However, Iceland has complete religious freedom, and other Protestant and Catholic churches exist. Given Iceland's remote geographic location, its long-established culture and language, and its small population, it is a tightly-knit homogenous society.

Agricultural production is a vital part of the Icelandic economy, accounting for 1 percent of its GDP (1998 est.) and employing over 16 percent of Iceland's workforce . Fish is the republic's main agricultural export but Iceland also produces potatoes, turnips, cattle, and sheep.

The fishing industry has grown to symbolize Iceland's economic independence from its Scandinavian neighbors. The Icelandic Ministry of Fisheries reported that in 1999 the total catch of fish by the Icelandic fleet was 1.7 million tons. In 2000, marine products accounted for more than 70 percent of Iceland's total export earnings, making Iceland's economy vulnerable to changing world fish prices. Cod and capelin are the most abundant fish in the catch. Full free trade in fisheries products has been established not only within the European Free Trade Association (EFTA) but also in a series of free-trade agreements with countries in Central and Eastern Europe and in the Mediterranean.

Iceland recognized in the 1970s that it was in danger of depleting its fisheries, and initiated a plan involving Individual Transferable Quotas (ITQs) and Individual Vessel Quotas (IVQs). While complex, the aim of the plan is to fairly allocate fishing rights to those in the fishing industry. Some argue that the plan, because it encourages efficiency and speed, has rewarded larger vessel owners at the expense of smaller operators, thus it is still a matter of some disagreement in Iceland. But overall, most observers feel that the plan has succeeded in managing Iceland's fisheries.

The European market is the most important outlet for Icelandic agricultural products. Iceland is a member of the European Economic Area (EEA), which gives it full access to the EU without requiring membership in the body. But progress in fish-processing technology and transport has opened up new trade possibilities with other countries. Exports to Japan are increasing and emerging markets , like China and Korea, hold promise for the future. Attempts to further open markets in the fisheries sector have given Iceland virtually tariff -free access for most of its exports to Europe. While EEA membership has reduced pressure for Iceland to join the EU, it risks being left on the sidelines as the European Union expands.

While a small country, Iceland has a strong industrial sector that accounts for 21 percent of its GDP. Like its 2 other main economic sectors, industry in Iceland is centered on its natural resources. Fish processing, aluminum smelting, ferrosilicon production, and geothermal power are its main industries.

. Mineral resources are scarce in Iceland, though efforts are being made to develop deposits of diatomite (skeletal algae). Iceland has vast geothermal power sources (which develop power from the internal heat of the earth) and about 96 percent of the population enjoys geothermal heating in their homes. Geothermal energy plays an important role in Iceland's health-care system, which has shown interest in its medicinal possibilities. The Blue Lagoon, one of Iceland's most popular tourist attractions, is a good example of a combination of the traditional utilization of geothermal energy for economic reasons and its non-traditional utilization for healing. Geothermal energy is also used to generate electricity, and the effluents from power plants (extra thermal energy) can be used for many purposes in connection with spas and the tourist industry.

Iceland's abundant hydroelectric power sources are controlled by the government. The largest power station in Iceland has a capacity of 240 megawatts (mw). Other major hydroelectric stations are at Hrauneyjarfoss (210 mw) and Sigala (10 mw). Efforts are underway by the government to export hydroelectric energy to Europe by transporting it via submarine cables. The government is also investigating ways to expand its aluminum and ferro-silicon melting plants. One such venture is the Nordural aluminum plant, which accounted for a 1 percent growth rate in Iceland's 1998 GDP. Nordural is a wholly-owned $180 million investment by Columbia Ventures of the United States. As of 2001, plans were underway to build a new aluminum plant in the east of Iceland or expand existing ones. A new or expanded plant would increase investment and GDP growth.

Iceland's service sector accounts for approximately two-thirds of GDP, and has been rapidly increasing since the 1990s, particularly in the areas of financial services, tourism, software production, and biotechnology.

Tourism is a growing and important industry in Iceland. In fact, the national airline, Icelandair, is one of the country's largest employers. According to Statistics Iceland, by 1999 tourism accounted for 4.4 percent of GDP on net receipts of Ikr282 million, up from 3 percent just 10 years earlier. The industry is expanding with the government's promotion of the country's magnificent natural attractions such as whale-watching, hot volcanic springs, glaciers, and horseback riding throughout the country. By 1999 the country boasted 24 hotels and guest-houses. It is a promising economic growth area and its numbers increased by 16 percent in 2000.

The sector that is showing the most rapid development is biotechnology. Iceland has unique natural resources and its position on the mid-Atlantic ridge is the source of its many hotsprings and the high-temperature areas where thermophilic bacteria (which thrive on heat) live, which can be utilized in various industries, especially pharmaceuticals. Scientists believe that thermophillic bacteria could lead to the development of better drugs and to more environmentally friendly forms of industry.

Iceland's rather limited human gene pool—due to its homogenous and cohesive population—makes it an invaluable laboratory for the study of the role of genes in the transmission of diseases. However, a fierce debate over genetics and individual rights erupted in Iceland in 1998. An Icelandic biotechnology company, deCode Genetics, wanted to include Icelanders' medical records, family trees (which are meticulously documented in Iceland; some can be traced as far back as over a thousand years ago), and genetic information into a single database. The company claimed the database would be beneficial to the health of Icelandic citizens, while critics argued such a project would simply serve the financial interests of deCode Genetics. The Althingi passed a bill in 1998 which allowed the Ministry of Health and Social Security to grant a license to create and operate an Icelandic Health Sector Database (IHD). In 2000, the Ministry awarded a 12-year license to Islensk erfdagreining, a subsidiary of deCode, to build and run the IHD, which has been operational since 2001.

Three commercial banks, with branches and savings banks, operate in Iceland. Investment credit funds, insurance companies, private pension funds, and securities firms are among Iceland's financial institutions. During the 1980s, the financial sector was deregulated and reformed to help bring inflation under control.

Iceland has no territories or colonies.

I love this article and I hope that you can write more.
4
Potatoe

There should be more information about the capital of Iceland.