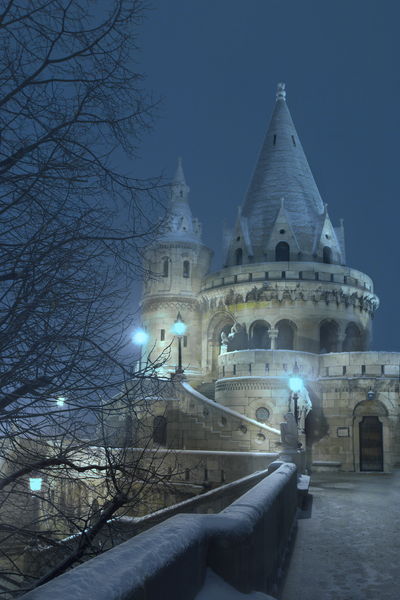 Hungary is a landlocked country in eastern Central Europe bordered by Austria, Slovakia, the Ukraine, Romania, Serbia, Croatia, and Slovenia. Located in the Carpathian Basin, it is surrounded by the Carpathian Mountains, the Alps, and the Dinaric Alps. It has a total area of 93,030 square kilometers (35,919 square miles), 690 square kilometers (266 square miles) of which is water. Comparatively, Hungary is slightly smaller than the state of Indiana. The capital, Budapest, is located in the central northern region on the Danube river, which runs from Austria to the Croatian-Serbian border.

Some 60 percent of Hungarians live in urban areas. Compared to other European countries in population density, Hungary ranks in the middle with about 109.4 persons per square kilometer (283 per square mile). The most densely populated areas lie in the industrial axis areas, running southwest to northwest, that are rich in natural resources.

The Hungarian population is predominantly ethnic Hungarian (89.9 percent), descendants of the Finno-Ugric and Turkish tribes who merged with the Avars and Slavic tribes in the 9th century. The modern population also includes Roma (Gypsies, 4 percent), Germans (2.6 percent), Serbs (2 percent), Slovaks (0.8 percent), and Romanians (0.7 percent). An interesting feature of Hungary is that many ethnic Hungarians who identify themselves as Hungarians also live in bordering states and other countries, approximately 5 million in all. The largest Hungarian population outside Hungarian borders—approximately 2 million—lives in the Romanian region of Transylvania. Another 700,000 live in the Slovak and Czech Republics, and some 650,000 live in the former Yugoslavia.

Once a major component of the Hungarian economy under communist rule, industrial enterprises struggled in the early 1990s to come to terms with operating in a free market. By the late 1990s, however, investments in many industries and the expertise and education of Hungarian workers contributed to a resurgence in the industrial sector. From 1999 to 2000 alone, industry expanded 18.3 percent, the third straight year of double-digit growth in this sector.

Manufacturing forms an important component of the Hungarian economy and was responsible for 84.6 percent of Hungary's exported commodities in 1998, even though most of Hungary's industries must import the raw materials used in the manufacturing process. The engineering industry—which is dominated by automobile and automobile parts production—accounts for roughly one-third of industrial output. Other leading manufactured products include steel (both crude and rolled), cement, aluminum, textiles, paper products, and shoes. The manufacture and processing of agricultural products is also an important contributor to Hungary's manufacturing output.

The chemical industry is an important component of the Hungarian economy. The plastic base materials and plastic processing industries were major components within this sector, contributing 2.1 and 2.6 percent of total industrial output, respectively. This sector is mainly concerned with producing goods for other companies within the industrial sector, and produces some goods for export. The pharmaceutical industry contributes 2.4 percent of industrial output and is primarily oriented toward producing human and veterinary medicines, fine chemicals, pesticides and insecticides, and other pharmaceuticals.

Mining was an important component of Hungary's industry during the communist period but has declined considerably since the collapse of the communist regime in 1989. Under communism, the government owned all subsurface resources and held exclusive rights to extract and use them. The only exception was uranium ore, which was mined by an agency of the Soviet Union. In the mid-1990s Hungary's chief mineral products were hard coal, lignite, bauxite, petroleum, and natural gas.

Tourism is an important and growing contributor to Hungary's economy. Not only does it directly fuel economic activity, but it has also in the past provided an important source of foreign currency. After agriculture, Hungary's second largest net foreign exchange earning source is tourism. The capital, Budapest, is a strong attraction for many tourists, with its many museums, churches, castles, and cultural events, including an annual spring festival of music and drama. In all, Hungary maintains more than 100 public museums throughout the country. Lake Balaton is also a popular vacation spot for summer recreation activities such as boating, fishing, and swimming. In 2000, according to the Hungarian Statistical Office, 31,141 foreigners visited Hungary, generating a total balance of revenues and expenditures of 2.5 billion euros.

Retail commerce forms an important and growing part of Hungary's economy. At the end of 1999 some 103,000 economic associations and more than 150,000 retail businesses were in operation. This represents 149 retail stores for every 10,000 inhabitants. Nationwide, the most important players in the retail sector are involved in the sale of food and groceries, accounting for 35 percent of the retail trade. Leisure and other items come next at 24 percent, followed by textile and clothing retail at 17 percent. Total retail revenues have been steadily rising, at 4.3 trillion forints in 1999, compared to 3.8 trillion in 1998.

Financial services are provided by a competitive and largely privatized banking sector. The largest bank, the National Savings Bank or OTP, has branches nationwide and provides a full range of personal and business banking services. Many other banks exist, most private and wholly or partially foreign-owned. Bank services include personal accounts, credit and debit card accounts, mortgage and personal loans, business accounts and business loans, foreign currency accounts and currency exchange, insurance services, and safety deposits. Customer service in Hungarian banks lags behind United States standards but has been steadily improving as the sector becomes more competitive. Most banks now offer Internet and mobile phone account access, and all provide

Hungary has no territories or colonies.

U.S. Department of Energy, Office of Fossil Energy. An Energy Overview of the Republic of Hungary . <http://www.fe.doe.gov/international/hungover.html> . Accessed September 2001.

Welcome to the Embassy of the Republic of Hungary. <http://www.hungaryemb.org> . Accessed September 2001.

I am 12 adn in 7th grade doing a report on Hungary and this in 1 of the best resourses I have used! Thanks
3
RICHARD MWAMDAZA

This information has helped me to come up with vital idears about Hungary,and now I am preparing a presantation to present it to my fellow students.Thank you very much.
4
MIK LOG

very helpful.Would reccomend it to anyone doing a project.THXS PEOPLE
5
Muhamamad Farooq

Hi
Really impressed to learn about the story of pre communist and post communist period.
But hope that the collaborations of different bloods in Hungary Economy may feul new blood to new horizens of progress .
Wishing a glorious future to Hungarian Peoples.
6
Ti-nach

This article was very useful for my Geography report. Thank you for gathering all of this information into a single article! It saved me much time.

~people are posting their age publicly like that? No wonder COPPA was formed~
7
Jenny

I'm 15 and in the 9th grade. This was very helpful with my research paper on Hungary's development.
8
me

i really hope this helps me with my geography project!!
9
skylare