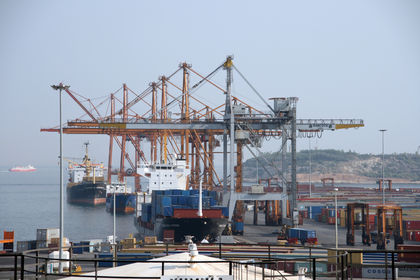 Member countries of the European Union have dominated international trade in Greece. Germany and Italy

are Greece's main EU trading partners, with 25 and 11 percent of exports and 16 percent of imports each, respectively. Outside of the EU countries, the United States is Greece's largest trading partner, with 16 percent of exports and 11 percent of imports. Other significant partners include the United Kingdom, Central and Eastern European countries, and the former Soviet Union. In the 1990s, the biggest trade increases occurred with South Korea, Bulgaria, Egypt, Japan, and China. The former republic of Yugoslavia's internal political problems resulted in a sharp decline in its trade with Greece.

Greece must keep its economy in order as a member of the EU. To do this, the government embarked on an ambitious privatization plan during the 1990s, and continues to encourage foreign investment. Greek businesspeople are getting used to competition from international firms, and the government keeps state industries, such as tourism, open to private investment. A good example of foreign investment in a state-owned industry is the operating company Athens International Airport SA, which constructed the airport and will handle its operations. The Greek government owns 55 percent of Athens International Airport SA and the remaining 45 percent belongs to the German Hochtief Group.

Membership in the European Union has been extremely beneficial for Greece. Net payments from the EU budget have significantly decreased Greece's account balance and the state budget deficit. Support packages for public works projects such as the Athens Metro, and economic and human development projects, have been especially useful in attempting to upgrade Greece's infrastructure.

Greece's balance of trade has traditionally been negative (see chart). In 1991-93 exports of goods fell short of imports by more than US$13 billion. By 1998 that trade imbalance had grown to US$15.3 billion on exports of US$12.4 billion and imports of US$27.7 billion. Greece's trade deficit has usually been covered by loans from the EU, remittances from Greeks living abroad, tourism, and shipping.

I would like to know how much a kilo of olives in Greece is, please.

Thank you in advance.