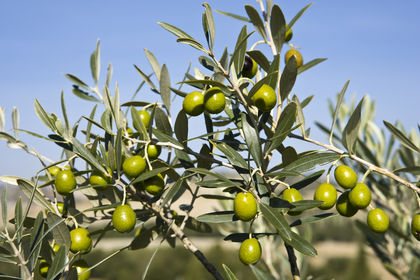 Greece's agricultural sector suffers from a lack of many natural resources. Approximately 70 percent of the land cannot be cultivated because of poor soil or because it is covered by forests. Agriculture is centered in the plains of Thessaly, Macedonia, and Thrace, where corn, wheat, barley, sugar beets, cotton, and tobacco are harvested. Greece's low rainfall, its rural land ownership system, and the emigration of the rural community into urban areas or abroad are factors that hold back the growth of the agricultural sector. In 1998 agriculture accounted for only 8.3 percent of GDP.

While agriculture is not a thriving economic sector, Greece is still a major EU producer of cotton and tobacco. Greece's olives—many of which are turned into olive oil—are the country's most renowned export crop. Grapes, melons, tomatoes, peaches, and oranges are also popular EU exports. Wine is an export with promise, and the government has urged vineyard owners to produce higher quality wines to increase its popularity as an international export.

Given Greece's vast coastline and its numerous islands, it is natural that a fishing industry exists. However, it is not as vital to the economy as would be expected from a country with a rich maritime history. Over-fishing has lessened the impact of fishing revenues on the economy. Pollution in the Mediterranean has also damaged the industry.

Animals and animal production constitute a significant part of Greece's agricultural output. Goat and sheep meat and milk are popular and provide about 6 percent of agricultural production, especially sheep milk, which is used for making Greece's renowned feta cheese. Hogs, cattle, chickens, rabbits, beehives, and pigeons are other important livestock.

Greece adopted a system of farming cooperatives as early as 1915 to streamline farming efforts. These cooperatives are now unionized and have been supported by every government that comes to power. Under the socialist governments of the 1980s, the cooperatives were greatly enhanced, and they received a large percentage of agricultural loans.

The European Union has granted Greece a number of subsidies to bolster its agricultural sector, but it continues to perform poorly in the 21st century. To expand the market for Greek food exports, the Ministry of Agriculture established a private company, Hellagro SA, to assist Greek companies in selling their products over the Internet. Private stockholders will hold the majority share in Hellagro, and financing will come from e-commerce , commission (money paid for performing a given act or transaction), investment opportunities, and joint ventures . The government is hoping this effort will help revitalize the struggling industry.

this is very informative. am kenyan and trying to learn more to know the strategies you use to develop agriculture. the technology, labor and generally new extension models.
good and informative site
hassan
2
macy

this is a very useful and resourceful website. I am doing a geography unit assignment about greece. we need to find its agricultural information, make a weather and precipitation graph and do a contour map. So this site is very useful.
-macy smith,12
3
IMAD HASSAN

Hi. I think this is a great website. It is very informative about trade, farming, and animals.

I am agriculturist. I want to start organic farming here in Greece. Useful information from this site but I think still big market and lot of opportunities
Can anyone help me here in this case to start organic tropical vegetables and tropical fruits
+306940117862
11
Telly Nicolaou

Does, Is Marathon-a in Greece classed or fall under the Agricultural Green Zone?