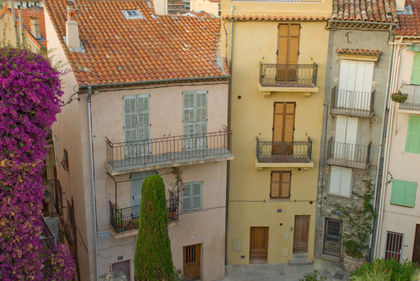 World War I and II, which were separated by a widespread depression, had a dramatic impact on the whole of Europe, including France. In addition to the loss of manpower, productivity, and wealth, the infrastructure of the European countries was largely destroyed. In the 1950s, only half of French families had running water in their houses, and access to television and automobiles was highly limited. Half a century later, the picture has changed drastically, at least for the larger part of society. France is an advanced industrial country in every respect, although there are pockets in French society that are still comparatively under-developed. The per capita GDP in 1995 U.S. dollars has increased from under US$20,000 in 1975 to just under US$28,000 in 1998, making France among the highest-income nations in the world. However, men tend to earn US$10,000 (1998 dollars) more than women per year. The educational system, though, is more egalitarian: 94 percent of females and 91 percent

of males have attended either a primary, secondary, or tertiary educational institutions. France spends about 6 percent of the GNP on public education, slightly higher than the average for OECD countries. However, only 5 percent of the students are in science in tertiary educational institutions, which is a concern to policy makers about the country's competitiveness in information age.

Standards of living are difficult to assess, and most economists group the Western European and North American countries close together at the top end of most "quality of life" scales. The United Nations Development Program ranked France as thirteenth on the "Human Development Index" in 2001, a testament to France's excellent health care, literacy, income, and life expectancy.

World Bank data show that the poorest 10 percent of the population receive only 2.8 percent of the national income in France. The poorest 20 percent receive only 7.2 per cent of the income. The highest 20 percent, on the other hand, possess 40.2 percent. Unemployment is a major problem, with a rate of 11.7 percent in 1998. Even though the unemployment rate decreased by 5 percent from 1994 to 1998, the rate is still high enough to cause concern among economists. Another related, but less apparent problem is the insecurity and low pay in

jobs which do not require special skills. Marginal increases in government aid programs have not alleviated the problem completely.

Worst hit by the economic inequalities in France are immigrants, who are often subjected to severe discrimination. Some authorities in certain parts of the country have tried to encourage the native population to have more children by offering child benefits while denying immigrants the same services. The EU, on the other hand, has special educational programs for minorities and immigrants.

The percentage of people living with AIDS (0.37 percent) is slightly above the OECD average (0.32 percent) according to UNDP statistics. Public expenditures on health increased from 6.6 percent of the GDP in 1990 to 7.1 percent in 1996-98.

this is a awesome website and good information about France :]
2
kayla

this has a lot info. on france good for projects. this has helped me a lot
3
Saundra

This has been extremely helpful for my school project. Thank you!
4
Kelsey

This website has a lot of useful information. Helped very much on my school presentation over France. Highly recommended for students or anybody looking to research France.