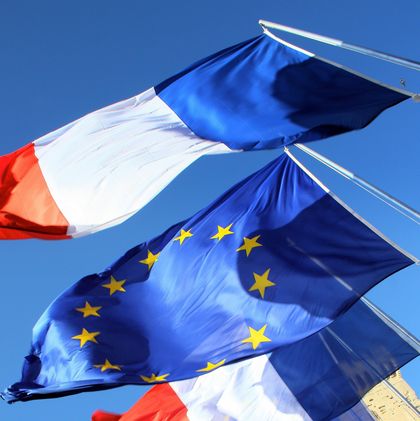 By the 18th century, France was one of the richest nations of the world. The potential for industrial development made France a rival to England, perhaps the most powerful country on Earth at the time. But it was its agricultural potential at the beginning of the Industrial Revolution (the period during the 18th and 19th centuries when Europe changed from agrarian, handicraft economies to the those dominated by industry and machine manufacture) which made France a world power. However, its sluggishness in moving from agrarian to industrial modes of production, together with several other factors such as a declining population, left France behind in an industrializing world in the 20th century. As this process continued, and due in part to nationalist sentiment, France largely closed its doors to foreign competition in order to protect its own industries. The nationalization of major industries in France took place in the late 1930s in railways, coal, natural gas, electricity, and the banking sector. Flagship companies in various transportation sectors, such as Renault and Air France, also came under the state control. Although a capitalist country, France made many socialist adjustments such as heavy government control over the economy, which included strict government regulation of many industries or powerful representation of the government in sectors considered essential to the national economy. As part of its statist economic policies, France implemented national economic development plans.

Despite its mixed economic system, France has also recognized since the early post-World War II era that economic integration with Europe is in its own best interests. To this end, France has been the major impetus in the formation of such bodies as the European Coal and Steel Community (in the early 1950s) and the European Economic Community. These organizations were the first steps toward both economic and political union in Europe.

Currently the government's role in the economic sphere is much less than before, especially because of the requirements of the European Union (EU). Since the early 1990s, French companies have faced competition from their European counterparts with less help from the government. In an effort to privatize the state-owned industries, the government is selling off its shares in France Telecom and Air France, along with companies from the insurance, banking, and defense industries.

Because of its fertile and vast land, France has become a major agricultural producer of Europe, making use of modern agricultural technology. The agricultural sector enjoys generous government support in the form of subsidies . This policy sometimes becomes a point of contention with France's EU counterparts. Three-fifths of the land is devoted to agricultural-related economic activities. Besides wine, France is famous for its beef, veal, poultry, and dairy products. Various types of grains also make France the leader among European nations in agricultural production. Overproduction of the world-renowned French wine and competition from foreign producers have conspired to bring about decreases in its price, although the government as of 2001 has tried to discourage overproduction in an attempt to reverse this alarming trend.

France has a long seashore, but fishing is not one of the major components of the economy, except in coastal areas such as Normandy and Brittany, the southern Atlantic coast, and the Mediterranean, where it employs a significant local labor force . France has few fishing ports used in shipment of fish products and ranks 20th in the world in total fish production.

Even though France has a highly-educated labor force, unemployment—which stood at 9.2 percent in December 2000, according to the International Labor Organization (ILO)—is still a major problem, mainly because of the slow growth of the economy. Employment opportunities for college graduates were especially lacking. A 35-hour work week was introduced in 1999 by the government in order to create more jobs. Small companies especially objected to the measure as burdensome, for it forced them to hire more workers. Larger firms are more comfortable with the shortened work week, arguing that participation in the European Monetary Union and a common currency have brought new flexibility into the market and hence has eliminated the costs brought by the shortened work week.

As of the end of the 20th century, the capital goods sector was one of the fastest-growing sectors of the economy, followed by automobiles and services. The French government predicts continuing stable growth in the first few years of the 21st century, largely due to investments in technology and the promise of structural reforms. France's infrastructure is modern in all respects.

Hi I really find this article very helpful. I hope all others also find it good
3
Claire

Extremely helpful! Thank you so much! Everything here is not in many other websites.
4
Chhany

I find it really helpful with my assignment. Thank you,the author. It would be really great if you could bring up with some more information such the main sectors of France's economy and its trading partners worldwide.
5
Wendy

This info. was exstreamly helpful for my economic project.
6
Alex

This was a very helpful page for my project. I am very glad i was able to read it. Thank y