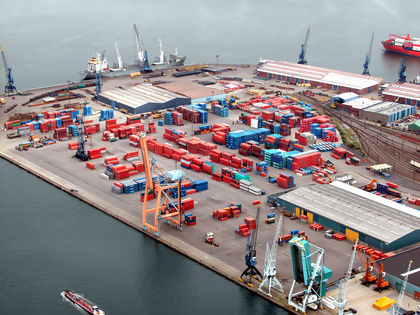 Belgium's economy is dependent on international trade. From year-to-year, foreign trade accounts for approximately 70 percent of the nation's economy. This makes Belgium particularly sensitive to disruptions in global trade. Recessions or other economic problems around the world often cause reciprocal problems in Belgium's economy. Fortunately, the kingdom has a variety of trade partners so that problems in one export market are mitigated by export diversity. For instance, since companies were able to shift exports to other markets, Asia's economic problems in the late 1990s had little significant impact on Belgium.

The nation's main trade partners are in the EU. In fact, in 1998 some 76 percent of Belgium's exports went to nations in the EU. In that year, the main export market for Belgian goods was Germany (19 percent), followed closely by France (18 percent), the Netherlands (12 percent), and the United Kingdom (10 percent). Most of Belgium's imports also came from the EU that provided 71 percent of the kingdom's imported products. Germany was the main exporter to Belgium and provided 18 percent of goods, while the Netherlands provided 17 percent, France 14 percent, and the United Kingdom 9 percent. Total foreign investment in Belgium is $68.1 billion. The Netherlands is the principal source of foreign investment (21.9 percent), followed by Germany (17.1 percent), France (16 percent), and the United States (11 percent).

Since Belgium is home to the headquarters of the EU and over 100 international organizations, it has a unique perspective on world trade and global markets. It also has significant influence on trade. Since it joined the European Community (now EU), Belgium has supported free trade and advocated measures that lower tariffs and reduce other barriers to the free movement of goods and services, labor, and capital within Europe. Belgium and Luxembourg also continue to be economically linked through BLEU. Despite its membership in the EU and BLEU, Belgium has bilateral trade agreements with 29 different nations. It has separate investment accords with Poland and Russia. It also has treaties with Bulgaria, Cuba, Liberia, Mauritania, and Thailand. Under the auspices of BLEU, it has jointly signed with Luxembourg. Many of these agreements have yet to be fully implemented.

Besides the national trade agreements, each of the 3 regions has the authority to grant financial incentives and other inducements to attract foreign goods and services.

Among the tactics used are loan or interest rebates if the project is financed, financing by the regional government, and tax breaks for foreign companies.

It doesn't says what does the belgim export, can you tell me if it's possible???
2
sierra

what is the trade ratio (e-i) for belgium?
and what what are their import products and import partners?
3
Nenika

What are Belgium's Industrial Trade Barriers. and who are their major imports and exports in trade economy
4
Nabil Ayed