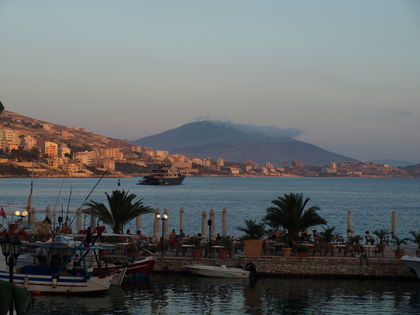 Albania is located in the southwestern part of the Balkan peninsula in southeastern Europe. It is bordered by the Yugoslav republics of Montenegro, Serbia, and Macedonia, and by Greece and the Adriatic and Ionian Seas. Albania has an area of 28,748 square kilometers (11,100 square miles), making it slightly smaller than Maryland. The capital, Tiranë, is situated in the west-central part of the country near the Adriatic Sea.

The population of Albania was 3,510,484 in July 2001, compared with 2,761,000 in 1981. Population density averaged 111 inhabitants per square kilometer (287 per square mile) but nearly two-thirds of the population were concentrated in the west, especially in the Tiranë-Durrës region. Density there reached 300 inhabitants per square kilometer (777 per square mile). In 2001, the birth rate was 19.01 per 1,000 population while the death rate equaled 6.5 per 1,000. Albania had one of the most youthful populations in Europe, with 30 percent below the age of 14 and just 7 percent older than 65. The population growth rate in 2000 was comparatively modest, at only 0.88 percent, and the emigration rate stood at 3.69 per 1,000. Since the collapse of communism in 1989, many Albanians, allowed to travel abroad for the first time, have left their impoverished country for western Europe, mostly for Italy, Greece, Switzerland, and the United States. The emigration rate has declined from a previous rate of 10.36 in 2000, however.

There are 2 major Albanian ethnic subgroups with distinct dialects: the Gegs in the north, and the Tosks in the south. The Gegs account for more than half of the population, but the Tosks have been traditionally in control. The Tosk dialect of Albanian is the official language. Albanians account for 95 percent of the population, Greeks for 3 percent, and Vlachs, Gypsies, and Bulgarians for the other 2 percent. Albania is predominantly rural, with about 59 percent of the population living in the countryside (1999). The population of the capital—Tiranë—is 312,220 (2000); other cities include Durrës, Elbasan, Shkodër, and Vlorë.

Albania has no territories or colonies.