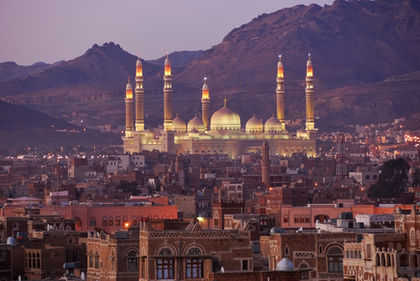 Yemen is located in the Middle East at the southern end of the Arabian Peninsula. The Arabian Sea, the Gulf of Aden, and the Red Sea bound its south and west. It is also bordered by Saudi Arabia to the north and Oman to the east. Yemen also includes the island of Socotra in the Indian Ocean, and the Kamaran group in the Red Sea. With an area of 527,970 square kilometers (203,849 square miles) and a coastline of 1,906 kilometers (1,184 miles), Yemen is slightly larger than twice the size of Wyoming. The capital city, Sanaa, is located in the west. Other major cities include Aden in the south and al-Hudaydah on the Red Sea coast.

With a population of 18,078,035 (est. July 2001), Yemen is one of the most populous countries on the Arabian Peninsula. The 1990 population estimate was only 11.88 million. The population growth rate in 2000 was estimated at 3.36 percent, but is expected to drop significantly in the coming decade. With a projected growth rate of 2.8 percent between 2000 and 2015, the population is expected to reach 36 million by the year 2029. The majority of the population are Muslims of the Sunni Shaf'i and the Shi'ite Zaydi traditions. There is also a small minority of Jews and Christians.

Yemen's population growth is very high by world standards, and the highest in the Middle East. The population is generally young, with some 50 percent below the age of 15. About 25 percent of the population live below the poverty line, up from 19 percent in 1992, and the average annual income is less than US$400. Widespread malnutrition and diseases make the infant mortality rate in Yemen one of the highest in the region. An estimated 38 percent of Yemenis age 15 or older could read and write in 1990. Among women, the rate was only 26 percent.

Though Yemen's location would suggest a booming fishing industry, actual fishing production remains low, largely due to under-exploitation. Most fishing activity continues to center around small boats and family-owned businesses. The sector employs some 41,000 people and produced over 127,000 tons of fish catch in 1998. Yemeni fishing would likely benefit from regulation and effective enforcement to avoid the over-fishing of some species.

Oil is a significant source of revenue for the government and of export earnings. Yemen's oil reserves, however, are small by regional standards. Oil reserves, proven and unproven, are estimated to be about 4 billion barrels, in comparison to Saudi Arabia, which has over 260 billion barrels of proven and unproven reserves. Most of the oil production is concentrated in the country's 2 largest fields at Ma'rib and Masila. There are also significant oil fields in Jannah, East Shabwa, and Iyad. Unlike neighboring Arab oil producing states, oil production is dominated by foreign companies. Several foreign companies, such as Hunt Oil Company (U.S.) and Canadian Occidental, enjoy production-sharing agreements, but Yemen's uncertain political atmosphere and dim oil prospects have limited the number of foreign companies interested in the oil sector. The sector's future lies in the successful exploration of new fields.

In addition to oil, Yemen's Ma'rib region is home to natural gas reserves estimated at 16.9 trillion cubic feet. Although small by regional standards, the gas is produced in commercial quantities, but competition and the lack of potential clients have thus far hindered the development of this endeavor. Other minerals include gypsum, salt, and gold.

The manufacturing sector is an important and growing contributor to the Yemeni economy, accounting for about 12 percent of GDP in 1998. The sector has grown steadily in the last decade, but its growth is hindered by competition from imported goods and the lack of funding. Oil refining accounts for half of manufacturing activity. Refining activities are mostly concentrated in Aden and Ma'rib.

Yemen's small industrial base is built around small-sized, family-owned enterprises. Yemen has some 33,284 industrial establishments employing 1 to 4 workers. All large-and medium-sized establishments account for 5 percent of the total number of industrial enterprises. The bulk of Yemen's industrial base is centered on food processing and beverages, but production of cooking oil and flour has increased in recent years. The production of mixed metal products, such as water storage tanks, doors, and windows is the second largest industry, followed by the production of non-metallic products.

Tourism is not a significant contributor to Yemen's economy, despite the government's continuous effort to promote the country as a tourist destination. The sector suffers from a number of problems, foremost among which are political instability and the absence of modern facilities and infrastructure. Furthermore, at least 100 foreigners were reported kidnapped in 1999. Western countries have been advising their nationals against travel to Yemen since the 1998 abduction and killing of 18 foreigners. The number of tourists visiting the country dropped significantly after the 1998 incident, from 87,000 in 1987 to 45,000 in 1999.

Yemen's banking system is poor and suffers from a number of problems, including a poor loan collection record, low bank monetary assets, and questionable policies regarding the extension of loans to clients. Despite government efforts to reform the financial sector by setting new standards for local banks in 1997, the sector continues to suffer from poor enforcement and compliance, a weak judicial system to ensure collection, and a general lack of public trust in the banking system as a whole. Furthermore, the government's efforts to sell its 2 major commercial banks have been rather slow, mainly due to the long preparation time required to bring these banks up to standard for sale.

Both public and private banks operate in Yemen. Both state-owned commercial banks and 3 of the 12 private banks follow Islamic banking practices, which includes not charging interest on loans. There are also 4 foreign-operated banks. Banking facilities are virtually absent in rural areas, and most loans are extended to well-known businessmen or on the basis of personal connections, making it hard for independent entrepreneurs to access funding.

Yemen lacks well-developed commercial centers —even in the larger coastal cities—and, therefore, has a poorly developed retail sector. The majority of shops in major cities are small and family-owned and run. Small family shops and temporary road stands characterize this sector in the majority of inland towns.

Yemen has no territories or colonies.

Embassy of the Republic of Yemen. <http://www.yemenembassy.org> . Accessed September 2001.