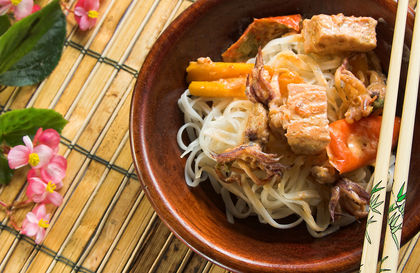 Vietnam is bordered on the north by China and to the west by Laos and Cambodia. To the east is the South China Sea (called "Eastern Sea" by the Vietnamese). The country's shape and size is often compared to a bamboo pole with loads at the end (north and south). In the central part of the country Vietnam is only 40 kilometers (25 miles) across. The total land area of Vietnam is 329,569 square kilometers (127,247 square miles), making it slightly larger than New Mexico. It has a long coast of 3,444 kilometers (2,140 miles). Its 2 major cities are the capital Hanoi in the north and Ho Chi Minh City (formerly Saigon) in the south. Other major cities are the ancient capital of Hue in central Vietnam, the coastal cities of Danang and Haiphong, and Dalat in the central highlands.

The population of Vietnam has considerable diversity, with 54 ethnic nationalities. However, 85 to 90 percent of the population are Vietnamese. The second largest ethnic group is Sino-Vietnamese, concentrated in the Ho Chi Minh City area. Among the most numerous of other ethnic nationalities are the Tay-Thai Group (1,200,000), Khmer (1,000,000), Hmong (558,000), and the Cham (99,000).

With its long coastline, Vietnam has an active fishing sector. Most of its catch is marine fish (94 percent). Many of Vietnam's marine products are being exported to countries such as Japan, and marine products now represent 9.2 percent of Vietnam's total exports (in terms of value).

Deforestation remains a major problem in Vietnam. In 1943, 44 percent of Vietnam was forests. By 1995, the forest area of Vietnam had declined to 23 percent. During the U.S. war in Vietnam, 5 percent of the forest was destroyed, and 50 percent was damaged. Deforestation has also been caused by uncontrolled logging, agricultural expansion caused by population growth, slash-and-burn agriculture, and the use of forest wood for firewood. To reverse this pattern of deforestation, the government has introduced 18 forest farming projects and a system of designated national parks.

The 1990s saw the emergence of Vietnam as a major player in 5 key manufacturing sectors: textiles, footwear and garments, agro-processing, electric and electronic industries, and automobile and motorcycle assembly. For example, Nike is now sourcing significant production of both footwear and apparel in Vietnam, and this has caused controversy related to alleged sweatshop conditions. On the improved road from Hanoi to Haiphong, there is a new Ford Motor Assembly plant; 45 different models of cars are now being assembled in Vietnam. Among the companies investing in car assembly production, in addition to Ford, are Mercedes-Benz, Toyota, Isuzu, Daihatsu, Suzuki, and several Korean auto companies. There are a total of 14 joint ventures in the emerging Vietnamese automobile industry. In Vietnam, there is a huge domestic market for motorcycles, the major mode of transportation for Vietnamese living in urban areas. Twenty percent of this huge demand is now being met by the local assembly. Vietnam's electronics assembly manufacturing sector also grew rapidly in the 1990s. Among the major international investors were Daewoo, Hitachi, and Phillips. The assembly of television sets almost tripled to a level of 364,000 in 1998.

Steel and cement production were also given high priority, primarily as a strategy for reducing or eliminating steel and cement imports. Another important new manufacturing area is plastics. Given its impressive oil and gas resources, this is a natural industry for Vietnam to develop.

With Vietnam's rapid industrialization and urbanization, there has been a dramatic increase in energy needs. To respond to this need and to avoid frequent power shortages, Vietnam has completed a number of hydroelectric power projects to generate increased electricity. Among the new power stations and plants are Ba Ria-Vung Tau, Da Nhim, Tri An, Hoa Binh, YALY, and Thamco. Many of these are in the south, to serve the growing manufacturing sector in the Ho Chi Minh/Saigon area. The goal of the government is to achieve a generating capacity of 33 billion kWh by 2002. The government also has a goal of providing electricity to 80 percent of rural households by the year 2005.

Mineral resources were a major factor attracting the French to Vietnam. Vietnam has commercially viable reserves of coal, iron ore, bauxite, chromite, copper, titanium, zinc, gold, apatite, and gemstones. However, other than coal many are underexploited. In 1996, Vietnamese coal exports were worth US$115 million. Vietnam also mines unrefined salt and phosphate rock.

Vietnam has now become a player in the international petroleum industry. In 1998, its petroleum exports were worth US$2.1 billion. It has potentially huge offshore oil and natural gas deposits in the South China Sea (known in Vietnam as the Eastern Sea), many of which remain unexplored. Though the international Law of the Sea has articulated elaborate rules for determining claims to the natural resources of the oceans, numerous disputed island groups in the South China Sea (such as the Spratlys) have led to considerable controversy. Nations such as Vietnam, China, Brunei, the Philippines, and Taiwan claim rights to these vast reserves of oil and natural gas. Several international oil companies are active in Vietnam, trying to profit from the nation's oil wealth. The Russians are active in this arena as well, in a joint venture with Vietnam, Vietsovpetro. Vietnam also plans to build oil refineries.

The 1990s has seen a construction boom in Vietnam in areas such as infrastructure (highway and bridge construction and renovation), hotel construction for the emerging tourist industry, office and apartment buildings for Vietnam's growing modern service sector, factory construction for the emerging manufacturing sector, and improved residential dwellings for occupancy or rent. Ho Chi Minh City now has many impressive, modern new high-rises. Also visible are many renovated and/or new Buddhist pagodas and Catholic churches, especially in the south. Funding for such religious projects has often come from remittances from overseas Vietnamese.

Subsequent to the introduction of the doi moi economic reform in 1986, in 1988 financial reforms began. Spun off from the State Bank of Vietnam (the country's central bank) were 2 new commercial banks: the Agricultural Bank of Vietnam (VBA) and the Industrial and Commercial Bank of Vietnam. Prior to the economic reforms, most bank lending in Vietnam was to state-owned enterprises (SOEs). However, by 1995 38 percent of credit went to the non-state sector. The newly created Agricultural Bank took an active role in expanding credit to farm households, reaching approximately 7 million households in 1995. The government subsidized lending rates. The central bank also continues to subsidize state commercial banks. Technically, the central bank is responsible for monitoring all financial sector organizations, though its implementation of this mandate has been weak.

Integral to the doi moi economic reforms was a downsizing of the government sector of the economy. There has been, for example, considerable demobilization of the Vietnamese army, especially after the end of the Cambodian conflict. By 1991, state enterprise employment represented only 6.2 percent of all employment. After initially reducing the size of the state sector in terms of employment, this sector has leveled off, and this part of the economy no longer is an engine to generate new employment.

Vietnam has considerable tourism potential and in 1998 it had 1,520,100 visitors. The country features multiple attractions, including the historical sites related to the war, majestic Ha Long Bay in the north, the ancient imperial capital of Hue, the former seaport of Hoi-an, attractive beach resorts, adventure tourism in the remote northwest, and the delightful central highlands. A Vietnam-U.S. joint venture in Dalat has produced a world-class golf course and club in the center of Dalat. Viet-nam's tourism infrastructure has improved significantly in recent years, with the building of many new hotels and the remodeling of others, such as the famous Continental Hotel in Saigon. The new roads to the International Airport in Hanoi and to Ha Long Bay also reflect the commitment to improve the tourism infrastructure.

Vietnam's tourism, however, is constrained by cumbersome visa requirements and an emphasis on the building of expensive up-scale hotels in both Hanoi and Ho Chi Minh City. Tourist development in the Vung Tau beach area near Saigon will work well for domestic tourism, but will not attract international tourists, since it is competing with destinations such as Bali and Phuket. An area of considerable potential is Vietnam's possible collaboration with Cambodia, Thailand, Laos, and Burma in promoting joint tourism. Visitors to majestic Angkor Wat in Cambodia, for example, could also include Vietnam in their itinerary, or visitors to the world heritage site at Ha Long Bay, could include Luang Prabang, Laos, in their itinerary.

In Vietnamese urban areas there has been a rapidly growing small-scale retail sector and large informal economy . Much of this sector involves the retail sale of a wide variety of consumer products and services. They range, for example, from the large and formal Saigon Bowl to vendors selling fruits and vegetables on the streets. It is common to even find barbers setting up shop on a sidewalk using a wall to hang their mirrors. Unfortunately, exact data are not available on the exact size and scope of the informal sector, but it is substantial and largely unmeasured.

Vietnam has no territories or colonies.

Do Phuong. Vietnam: Image of the Community of 54 Ethnic Groups . Hanoi: The Ethnic Cultures Publishing House, 1998.

Vietnam: Embassy of the Socialist Republic of Vietnam in the United States of America. <http://www.vietnamembassy-usa.org> . Accessed October 2001.

What is the average life span of men compared to women in Vietnam?
2
Michael L Chernick

Thank you. Although a few years old, information is clear and interesting
3
shiantel

This is good information,althoe i do think information and fact shouldnt be so hard to find.once u ask for sumthing the variation of ur spacifics shldnt be so open.i had to go through a couple of things to get exactly what i needed.(if there are any suggestions on quicker ways please let miii kno.)THNKX.
4
Josie

Amazing information!!! Such a great help with my project, thank you very much!!! All I need to know is what kind of housing is in rural, and urban areas? Can't find any info. on that question! Uhgg, :( .
5
shannon

has amazing information. has a lot of specific info used for any projects you want to do for Vietnam. i am doing one. thank you very much for posting this. :)