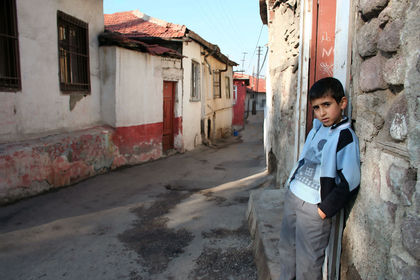 Using per capita income statistics, Turkey is ranked internationally in the low to medium income group. When compared to countries that were once at the same level but have gone on to make dramatic improvements in their income distribution, it is easy to see that Turkish efforts have been largely unsuccessful. In fact, the renewed and accelerated effort toward economic development and industrialization that began in the early 1980s has had the effect of sharpening the extreme income divide in Turkey. Between 1987 and 1994 the share of the national income earned by the bottom 20 percent of the population dropped by 7.25 percent, and in 1994 the richest 20 percent of the population controlled 47.7 percent of the wealth, while the poorest 20 percent controlled only 5.8 percent.

In addition to their primary residence, a wealthy family in Turkey typically owns several homes around the country. These usually include a second establishment for renting out, and one or more summer homes, mostly in the coastal regions of the Mediterranean or Aegean. Family ties are quite strong in Turkey; therefore most families

invest in real estate and rent those homes out until their children grow up and move into them. The children of such families thus have the advantage of starting out in life as well-educated homeowners.

A poor family in Turkey might own a home. This could be a farming shelter in a rural area or a makeshift home on the outskirts of urban areas. Some poor families rent low-level apartments, or move into their parents' homes. Where numerous people share one dwelling, unsafe conditions can result from the overcrowding. The children of these families get some education through the public school system, and might occasionally even make it to college, but in rural areas where the nearest school is miles away, the family might choose not to send their children to school. As in the rest of the world, for those in poverty, life in general is hard.

The fostering of industrialization by Turkish governments has had a negative effect on the farming communities. Even though the agricultural sector has, historically, been Turkey's largest employer, it has declined in importance relative to the rapidly developing industrial sector. As a result, the disparity in income between the rural and urban parts of the country has also widened, and has been the cause of significant migration from rural to urban areas. Primarily due to economic instability, emigration to other countries has also been a factor since the 1970s.

High inflation and the constantly decreasing purchasing power of the Turkish lira create additional problems. Typically, wages and salaries have failed to keep pace with the increasing prices of consumer goods and services. The average consumer price index inflation in 1999 was 65 percent, reflecting a monthly increase in the prices of goods and services of approximately 5 percent. Even when earnings are adjusted for inflation, the adjustments are generally made at the end of the year, forcing consumers to absorb the mid-year price increases until the year-end.

The structure of social classes in Turkey is similar in all large cities where the population exceeds 100,000 and evolved with urbanization and industrialization. The urban upper class is mainly made up of government officials, wealthy business people, and professionals, and is primarily determined by political power and/or education. The urban upper class is smaller than the urban middle class and less diverse. Education, particularly a college degree, is the passport to joining the urban middle class. Even though the middle class was expanding steadily during the early 1980s, persistently high inflation rates impeded its stability and growth. The biggest social class to influence the growth of cities since the 1950s is the rural working class. Large numbers of rural poor migrated to the cities, and the movement continues. Prior to the 1950s, more than 80 percent of Turkish residents lived in rural areas, and most of the migrants who came to the cities were unable to find affordable housing. They built shelters on the outskirts of the cities without official permission or approval and, by 1980, up to 60 percent of the inhabitants of big cities were living in these primitive settlements, with no electricity, plumbing, or paved roads. Eventually, some of these neighborhoods were incorporated into the cities and provided with those amenities. About 65 percent of the poor classes depend on unskilled work for their livelihood.

The Turkish government subsidizes education at all levels, from pre-school to university, for all citizens. The law enforces attendance at primary and secondary schools, which accounts for 8 years of education and takes pupils to age 14 or 15. However, due to the insufficient number of higher education institutions, only a select few candidates for college actually get to attend. The selection process is conducted through a nationwide examination held every year, from which students with the highest scores are placed in accordance with their choices. There are also a limited number of private universities for those who can afford to pay.

The Ministry of Health is legally empowered to provide medical and preventive health care services. It establishes and operates hospitals and other health care centers, trains health personnel, and supervises private health facilities. The ministry also supervises the medical and health care personnel who work for the public sector. The pay for state-employed physicians is considerably lower than the earnings of private-practice doctors, and medical facilities are still concentrated in urban areas. Consequently, although steadily improving, access to medical and health care in most rural areas is inadequate.