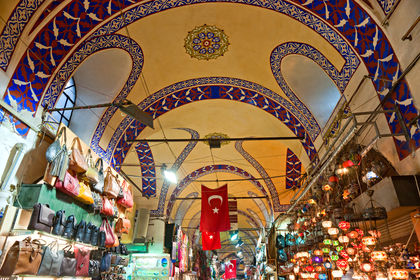 Trade played a minor role in the Turkish economy before 1980, but grew rapidly after economic reforms promoted liberalization of foreign trade. These reforms were designed to remove price controls , decrease subsidies , reduce tariffs , and promote exports. In addition to rapid growth in both exports and imports, the reforms brought a change in the structure of foreign trade, and the predominant role of agricultural products came to an end with the emergence of a greater emphasis on industrial products.

In addition to being a World Trade Organization (WTO) member, Turkey has also entered a number of multilateral trade relationships to increase its presence in the world trade arena. It signed a free trade agreement with the European Free Trade Association (EFTA) in 1991. In 1992, Turkey and 10 other nations in the Black Sea region formed the Black Sea Economic Cooperation Organization. Turkey is also a member of the Organization for Economic Cooperation (covering Central Asian

countries) and the Organization of the Islamic Conference. Separately, Turkey has entered into free trade agreements with Israel, and with several Central and Eastern European countries.

On 1 January 1996 the EU and Turkey entered into a customs union, covering industrial products and processed agricultural goods, but excluding traditional agricultural products from the agreement. Turkey's adoption of the EU's Common External Tariff has resulted in lower duty rates for third-party countries, including the United States.

In 1980, Turkey's total merchandise exports yielded US$2.9 billion. The share of agricultural products was 56.7 percent, while industrial products made up only 36.3 percent. Another 6.5 percent consisted of mineral products. In 1999, Turkish exports reached US$26.6 billion, a figure actually 1.4 percent lower than in 1998. The drop was primarily due to the difficult economic conditions that prevailed in Turkey as a result of the Asian financial crisis and the 2 earthquakes. The share of agricultural products in 1999 was only 9 percent, and mineral products 1.4 percent. By contrast, the share of manufactured products, on the other hand, made up 89.4 percent of total exports in 1999.

The 1991 Gulf war between the U.S.-led coalition and Iraq, and its resultant economic embargo against Iraq, have had adverse effects on Turkish exporters. While exports to Iraq were US$986 million in 1988, this figure had fallen to US$124.1 million by 1995. As a result, Iraq's share in Turkey's exports dropped from 8.4 percent (which would have been enough to rank Iraq as the third largest export market) to 0.56 percent in 1995. The 1992-95 war in Bosnia also took a toll on Turkish exports. Since most of Turkey's exports are to the European markets, the main method of transportation is surface freight. The Bosnian war brought a significant increase in freight costs, as well as causing numerous administrative difficulties. The 1997 Asian financial crisis also had a large impact on Turkey's exports, since the Asian countries are important competitors for Turkish products in overseas markets. The devaluation in Asian countries lowered their export prices and gave them a clear advantage over Turkey.

Edible fruits constitute a majority of Turkey's agricultural exports, and this trend continued in 1999. Among industrial products, textiles and ready-to-wear industries remained the major contributor. Other important industrial export sectors were iron and steel, electrical machinery, and motor vehicles and equipment. While Turkey's export markets are highly diversified, OECD countries make up a majority of the trade and took 67.8 percent of exports for 1999. Germany is the largest single export market for Turkey. In 2000, Germany took up 18.7 percent of Turkey's exports. The United States is the second largest export market, with a share of 11.4 percent, and the United Kingdom the third largest, with 7.4 percent. Italy and France take up the remaining 12.3 percent.

Turkish imports exhibit similar patterns of growth to their exports. In 1980, total imports amounted to US$7.9 billion. The figure grew to US$45.9 billion by 1998 and, by 1999, with economic difficulties affecting domestic demand, imports decreased by 11.4 percent to US$40.7 billion. In 2000, imports totaled US$55.7 billion. In 1999, 28.3 percent of Turkey's imports were made up of machinery, while chemicals made up 15.2 percent, semi-finished goods made up 14.5 percent, fuels made up 11 percent, and transport equipment made up another 9.5 percent.

Looking at the suppliers of the Turkish market, the patterns are very similar to the Turkish exports. OECD countries have taken the largest share of imports, a fact unchanged by 1999 when OECD countries constituted 69.6 percent of total supplies. Imports from the EU countries have the largest share within the OECD group, and 52.6 percent of total imports in 1999. Germany is the first import source for Turkey with a share of 14.5 percent. Italy ranks second with 7.8 percent, and France is third with 7.7 percent. The United States was the fourth most important source of Turkish imports, with a share of 7.6 percent.