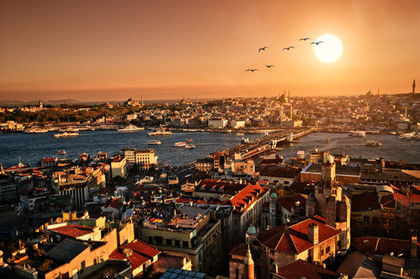 Historically, the agriculture sector has been Turkey's largest employer and a major contributor to the country's GDP, although its share of the economy has fallen consistently over several decades. In 1999, it accounted for 15 percent of GDP, while employing about half of the labor force . Although the sector has grown over time, the growth has been only about 1 percent faster than the country's population, and much slower than that of the industrial and services sectors. Farmers have been slow to adopt modern techniques, and much of the potential land and water resources are inefficiently managed.

Nevertheless, Turkey is one of the few countries in the world that is self-sufficient in terms of food. The country's fertile soil, access to sufficient water, a suitable climate, and hard-working farmers, all make for a successful agricultural sector. In addition, a broad range of crops can be raised because of the variety of different climates throughout the land. This has allowed Turkey to become the largest producer and exporter of agricultural products in the Near East and North African regions. In fact, according to The Economist 's world rankings, Turkey is one of the top 10 producers of fruit, wheat, and cotton in the world. More impressively, it ranks among the top 5 producers of vegetables, tea, and raw wool. As a result of this massive production base, Turkey enjoys a comparative advantage in many agricultural products, and a positive trade balance in agriculture that contributes significant relief to an overall trade deficit . The country's main export markets are the EU and the United States, to which Turkey exports dried fruit and nuts, cotton, and tobacco. Another major export market is the Middle East, which buys fresh fruit, vegetables, and meats from Turkey. By 1999, the value of agricultural exports had risen to US$2.4 billion and accounted for 9 percent of Turkey's export earnings (down from 60 percent in 1980). However, these figures could be misleading insofar as almost 50 percent of the manufactured exports also originate in the agricultural sector (primarily textiles and clothing). Therefore, the agricultural sector's direct and indirect total contribution would still account for 50 percent of total exports. Of Turkey's agricultural sector, crops account for 55 percent of the gross value, livestock represents 34 percent, and forestry and fishing make up the rest.

The vegetal (of, or relating to, plants and vegetables) production is primarily made up of cereals, pulses (edible seeds of various pod-bearing plants such as peas, beans, or lentils), industrial crops, and perishables. Of these, cereal crops occupy more than half of the cultivated land. The main species of cereal crops produced in Turkey are wheat, barley, oats, rye, maize, millet, and rice. These crops are produced in most parts of the country, with a heavier concentration in the central regions.

Of all these, wheat has a special place in the Turkish economy. Turkey is both a top 10 producer and a top 10 consumer of wheat in the world. It is the essential food element in the Turkish diet, generally eaten in the form of bread. Production increases in the late 1970s enabled the country to become a wheat exporter and, although the output slowed down in the early 1980s, renewed efforts have seen wheat production continue to expand. In 1998, the total wheat production was 21 million tons.

Turkey is also the main pulse producer in the Middle East and one of the leading producers in the world. The pulse output increased from 617,000 tons in the early 1970s to 1.1 million tons in the 1980s and 1.6 million tons in 1998. Since the mid-1990s, over 60 countries import Turkish pulses, primarily chickpeas and lentils.

The major industrial crops produced in Turkey are cotton, tobacco, and sugar beets. Cotton is crucial to the wider economy since it provides the fiber for textiles, the leading category of Turkish exports. Cotton is primarily grown on the coastal plains of the Mediterranean and Aegean seas, in the south and southwest. Cotton production in 1999 was 855,000 tons. Only 10 percent of cotton is exported in raw form, while the rest feeds the domestic textile industry. The Southeastern Anatolian Project is Turkey's largest development project. It seeks improvements in energy production, tourism, mining, gasoline, education, health, communications, industry and transport, and in active farming by means of extensive irrigation systems. When the project is completed, it is estimated that Turkey's cotton production will expand to twice the level of production in the year 2000. Another industrial crop, sugar beets, saw a dramatic increase in production in the 1980s and 1990s. In the 1970s, annual production was around 650,000 tons, meeting only domestic needs. In the 1980s, this increased to 1.5 million tons, and in 1998 the total production of sugar beets was 22 million tons.

Tobacco has been grown in Turkey for many centuries, and the tobacco industry is a major player in the Turkish economy, contributing 18 percent of total agricultural exports. Turkey ranks as the fifth largest tobacco-producing country in the world, and its number-one producer of Oriental tobacco, of which it grows over half of the world's supply. The country is also the world's fourth largest tobacco exporter. The crops are primarily concentrated on the Aegean coast and Black Sea regions, but eastern Anatolia also contributes to the output. The crop yield varies considerably from year to year due to climatic changes, but averages around 200,000 to 300,000 tons annually. On average, 30 percent of this output is exported to the United States and another 20 percent to the EU.

Perishable fruit and vegetables are also important to the Turkish economy. Out of the 140 perishables grown in the world, the country produces 80 varieties of fresh fruits and vegetables and exports 30 kinds of vegetable and 20 kinds of fruit. These include grapes, citrus fruit, melons, potatoes, onions, tomatoes, olives, and cucumbers. These exports are worth over US$1 billion annually to Turkey.

Turkey is prominent, too, in the world trade of edible nuts and dried fruits. In this category of agricultural products, hazelnuts, pistachios, sultanas, dried apricots, and dried figs are important exports. Records indicate that hazelnuts have been grown along the Black Sea coast since 300 B.C. and Turkey is a major producer, competing with Spain, Italy, and the United States in the international markets. In 1998, Turkish hazelnut production reached 580,000 tons. Turkey also leads the world in figs, producing 36 percent of the world's total production and accounting for 70-75 percent of total world exports.

Animal husbandry is also significant in the agricultural sector. Turkey has traditionally been an important supplier of live sheep, lamb, and mutton to the Middle East, especially Iran and Iraq, but the United Nations (UN) embargo on Iraq, following the Gulf War, adversely affected domestic meat exporters and led to a significant decline in exports in the 1990s. Sheep constitute 59 percent of the existing animal total in Turkey, followed by cattle (22 percent) and goats, both the common goat and the Angora breed (16 percent). Most livestock is grazed in the central and eastern Anatolian plains, as well as in the western Anatolian region. Turkey is self-sufficient in milk products, supplying around 10 million tons per year.

Turkey's basic agricultural resources are vast and offer considerable potential for expansion. However, to maximize this potential and increase efficiency, the agricultural sector needs government involvement in structural reforms and development projects. One of the several aims of the Southeastern Anatolian Project (GAP) is to strengthen and expand the agricultural resource base for one of the most underdeveloped parts of the country. Indeed, GAP is possibly one of the most crucial projects for Turkey, since the large economic disparity between urban and rural areas has created social tension, and contributed to damaging levels of migration from the countryside to the cities, primarily in the southeast. This situation poses a serious threat to future agricultural development and to the general economic health of Turkey.

Went to Turkey recently and was impressed by the fresh food.
2
ngetbol

i want to know about agriculture in turkey, and product line or rice and especially investment rice in turkey.
3
eric

wondering about processing tomato industry and the oppurtunity to invest in farms
4
Dr. Abdalla Khidir

so what is the main processed food in turkey. i want to now if it is really a major crop even in the us
7
Ahmed shousha

I would like to get a farming job.I have experinces in animal farming and farming equepment
8
Bamen yomi marius raoul

So great, where are the localisations of these farms ?
9
lahouari

Hi
I have the honor to make a negotiating statement
Investment rental project for the biggest agricultural land in Algeria
Negotiate with investors interested in farming for the largest farmland.
Agricultural investments and their content in Algeria are characterized by the most important transactions.
In any large area of land and type of land
635965833
10
lahouari