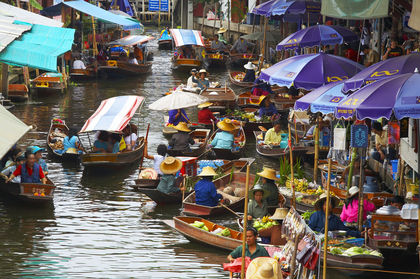 Thailand has a long history of international trade. Beginning in the 15th to 18th centuries, during the reign of the Ayutthaya monarchy, foreign merchants who lived near the kingdom's capital conducted trade with foreigners. The country's first significant trade treaty was

the Bowring Treaty in 1855 with Britain. Shortly after that, it also signed treaties with 14 other countries including the United States, France, Russia, Sweden, Spain, and Japan.

Today, the United States, Japan, and the European Union continue to be its top trading partners, absorbing 52.6 percent of all exports in 1999 and supplying 48.8 percent of total imports in the same period. Its other partners are Hong Kong, China, and the Association of South-East Asian Nations (ASEAN) countries, the most significant of which are Singapore and Malaysia. Other countries apart from those mentioned accounted for 18.4 percent of exports and 21.6 percent of imports in the same period.

Thailand's major exports are rice, tapioca products, cane sugar and molasses, and rubber for agriculture; chemicals, polymers, and plastics for the manufacturing industry; and gypsum, natural gas, and feldspar for the mining industry. Bank of Thailand statistics as reflected in the Asian Economic Survey of 2000 identified the country's major export products as machine parts, circuits, frozen shrimp, prawns, sundry items, computer parts, garments, vehicle parts, and plastic products. On the other hand, its major imports are petroleum, integrated circuit parts, and chemicals.

Despite the uneven balance of trade, the Thai economy continued to grow by an average of 6.8 percent in the 1970s, 7.5 percent in the 1980s, and 8 percent in the early 1990s before the Asian financial crisis. This growth can be attributed to 2 factors, namely the boom of the tourism industry and the inflow of foreign direct investment. According to International Historical Statistics, in 1970, the services sector contributed 44.1 percent of GDP, which increased in 1980 to 49.7 percent. Though this contribution fell to 46.9 percent in 1999, it is safe to say that the dollar earnings from the tourism industry generated a substantial amount, enough to offset the trade imbalance.