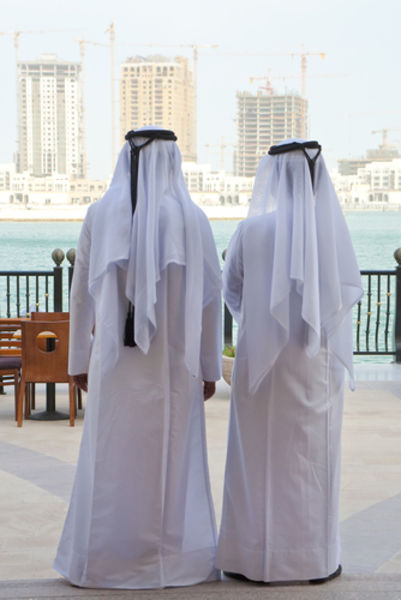 Saudi Arabians generally enjoy a decent standard of living, due in large part to government programs designed to minimize poverty. Saudi citizens are given free education (although enrollment is not required and has historically been low, accounting for relatively high illiteracy rates) and health care, and all adult Saudis are entitled to a plot of land and a loan of US$80,000 with which to build a house.

The GDP per capita in Saudi Arabia reached its peak in the late 1970s and early 1980s, when elevated oil prices were generating high levels of revenue. In 1981, GDP per head reached US$16,650. Slumping oil prices and declining production in the ensuing years caused the per capita GDP to fall. By the end of the decade the figure dropped to US$5,500. Rising oil prices following the Gulf War coupled with increased Saudi production helped raise the per capita GDP once again. In 1999 the figure stood at US$9,000.

Despite the extensive social safety net in Saudi Arabia, the unequal distribution of wealth in the country is fostering resentment among the country's poorest citizens. In 1999, the National Commercial Bank estimated that out of a population of 20 million, there were 120,000 millionaires controlling a combined fortune of over US$400 billion. Meanwhile, according to the Saudi American Bank, 20 percent of Saudi men between the

ages of 20 and 29 had no paid work. As a result, larger families were increasingly finding themselves under financial strain. The government, in recognition of the problem, began taking steps in 1995 to open more jobs to Saudi citizens. Two successive 5-year plans, from 1995 through 2004, have listed the Saudiization of the work-force as a primary objective. To this end, the government has passed laws requiring that at least 5 percent of the private sector be made up of Saudi citizens. Also, all firms have been ordered to increase the number of Saudi workers by 5 percent a year. At the same time, the government has attempted to limit the employment of foreign nationals by prohibiting the renewal of their work contracts and by raising the visa fees employers must pay to hire them.

Illiteracy rates are high in Saudi Arabia, hovering at around 20 percent in 1999. Consequently, the government in its development plans has placed heavy emphasis on improving education. Outside of defense expenditures, education spending accounts for the largest portion of the government budget (27 percent in 2000). Between 2000 and 2004 the government hopes to build over 1,000 primary schools, 819 middle schools, and over 900 high schools. During this time student enrollment is projected to rise from 3.9 million to 5.1 million. In efforts to create more highly skilled high school graduates, the government is also attempting to increase student enrollment in the kingdom's vocational schools and technical colleges. Efforts thus far have been successful, with vocational enrollment rising by over 20 percent between 1998 and 1999.

Health care also receives a great deal of government attention. Facilities are generally good. According to a 2001 report issued by the Ministry of Health, the 314 private hospitals provide 1 bed for every 461 people. The 2001 budget provided spending for the construction of 30 new hospitals.

thanks for the information,it helps me a lot.it will be really helpful with my presentation
2
um khaled

my wish, the saudi government will provide us home, i am saudi citizen we're living in small apartment for a long time ago, with low income, its my dream to have own house even though small,may god long life our father KING ABDULLAH BN ABDULAZIZ,and all al-saud familly member god bless them all and thank you for reading my wish.
3
Nurul

Who can give me information regarding Media Relations in Saudi Arabia? How is media control, media outreach and media access in Saudi Arabia? I need to know more about this in that country. feel free to share with me..thank you.